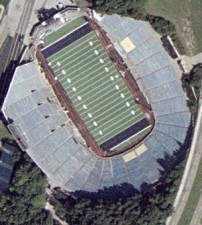 “The Rubber Bowl is a stadium in Akron, Ohio, United States, primarily used for American football…

The movement to build a stadium in Akron began in 1939 when Akron Beacon Journal sports editor James Schlemmer and Akron Municipal Airport director Bain Fulton began a campaign asking patrons to donate $1 each. Later that year, the Works Progress Administration authorized construction of a horseshoe-shaped stadium in southern Akron adjacent to Derby Downs, the home of the Soap Box Derby that had been built in 1936. Construction lasted approximately one year and the first event hosted was a state music and drill competition in June 1940. Dedication ceremonies were held in August 1940 before a crowd estimated between 36,000 and 40,000 the day before the running of the seventh Soap Box Derby.”