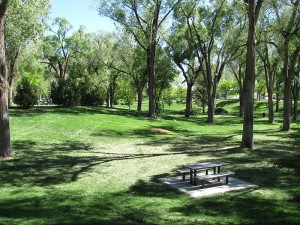 "Roosevelt Park opened during the middle of the Great Depression. It was built with federal Civil Works Administration funding obtained through Albuquerque Mayor Clyde Tingley's close friendship with President Franklin Roosevelt. The park's name was changed from the original "Terrace Park" soon after its opening to honor its popular benefactor. Designed by local landscape architect and greenhouse operator C. Edmund "Bud" Hollied, the park remains one of the Southwest's best examples of New Deal landscaping.

Hollied envisioned a sprawling, lush park in what was previously a sandy, garbage-strewn arroyo. With the work of 275 CWA laborers, each paid $39 per month, the park took form between the winter of 1933 and summer of 1934. It cost $122,338 to transform the 13-acre site. Over 2,250 trees and bushes, including umbrella catalpas and Tingley's beloved Siberian elms, were planted. An abutment along the south side of the park was built with stone from the demolished county jail at Rio Grande and Central. Its landmark status protects all of these features, even including the elms.

The general layout and landscaping scheme of the park remain essentially unchanged over the last 60 years.

When the park was completed in 1935 it had a driveway that encircled it; it has since been blocked so that only maintenance vehicles can use it now. Roosevelt Park continues to be a popular location for recreation and relaxation in the heart of the city."