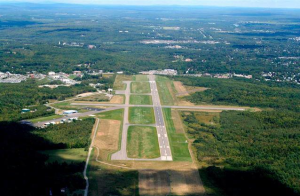 The Robert LaFleur Airport is a small general aviation airport in Waterville. It was originally opened in 1931. A 2011 history of the airport explains the federal involvement in its development.

In a 1933 town report, Mayor Thayer explains that: “In order to secure improvement for the airport— a very desirable improvement for the community—the City has entered into an agreement of lease, with option to purchase, with the owners of the airport, this condition being precedent to any activity by the Civil Works Administration. This contract will not involve any expense to the City of Waterville but will result in securing for this locality improvements that should make this airport one of the finest in the State of Maine.”

Mayor Jackson’s essay in the 1934 town report said that F.E.R.A. took over the work of grading and other work at the airport.

“In 1936 the Mayor of Waterville addressed the Council in connection with the future development of the airport in cooperation with the Federal Works Project Administration… The extension of the NE-SW runway to 2500′, the East-West runway to 2500′ and the NW-SE runway to 2000′, the installation of boundary lights and the clearing of other land adjacent to the runways was required. In the subsequent months various parcels of land were purchased to permit the necessary expansion of the airport. The total area of the airport with these additions was approximately 170 acres. By Council order of February 1, 1938, $1,640.00 was taken from the temporary appropriation to pay for these additional parcels of land.”

Finally, “[i]n 1947 the Waterville Airport was named in memory of Captain Robert A. LaFleur, a U.S. Army Air Corps officer who was declared “missing in action” somewhere over Germany on July 2, 1943.”