In 1933 Civilian Conservation Corps (CCC) Company 1825 was organized and located at the state game preserve. In 1935, under the supervision of the National Parks Service, the State Parks Division took control of the area. Between 1935 and 1941 CCC Company 1825 built a bathhouse, cabins, trails, group camps, shelters, and roads. Again, native stone was used on these projects. In 1937 the CCC and the Works Progress Administration (WPA) created Lake Carlton, named for Carlton Weaver.”   (https://digital.library.okstate.edu/)

“Robber’s Cave State Park is located about seven miles north of Wilburton on Highway 2. The coordinates shown above are located at the park sign, on the highway across from the Nature Center and Gift Shop.

The CCC work covered about 4480 acres of this 8000 acre park and wildlife management area. Because of the secluded cave here, it was thought to have been a popular hideout for outlaws such as Belle Starr and Jesse James. Known originally as Latimer State Park, the name was changed to Robber’s Cave State Park in 1936.

The CCC built the park between 1935 and 1941 with cabins, hiking trails, campsites, shelters and roads. With the help of the WPA, they constructed Lake Carlton. The Park was placed on the National Register of Historic Places in 2002.”

The marker at the site reads:

This beautiful park was created between 1935 and 1941
by members of the Civilian Conservation Corps Company
1825. Members were primarily World War I veterans
who had participated in the major battles of that war
and two veterans of the Spanish-American War. There
were 140 married members with 410 children.

CCC members were paid $30 per month, of which $25
was sent home. They also received housing, food, medical
and dental care as well as educational benefits.

Members of Company 1825 left a permanent memorial
to the service of its members in the form of this beautiful
park which serves countless thousands each year.

Dedicated to the members
of CCC Company 1825
and the three million members
who served our nation
April 30, 1988
Civilian Conservation Corps Alumni Association
and
Oklahoma Historical Society 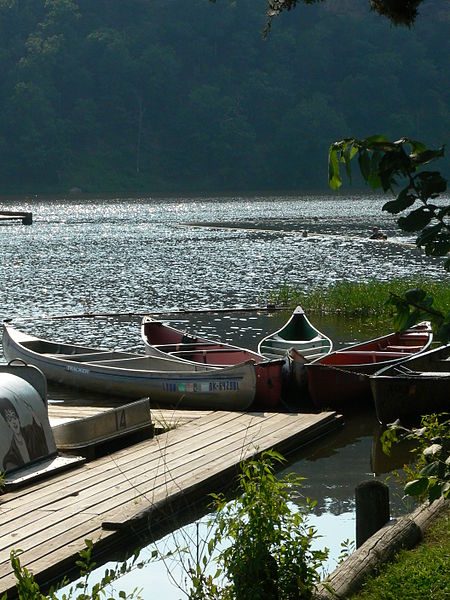