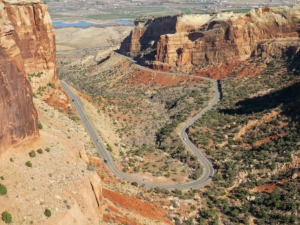 “At the far edge of western Colorado is Colorado National Monument, an area of water-sculpted sandstone, colorfully striated cliff walls, rock arches, high mesas and abundant wildlife. Cutting along the cliff side of this sunset-colored country is Rim Rock Drive, a 23-mile paved road that connects each end of the monument. This winding road was built by the Civilian Conservation Corps. Through their efforts, millions of visitors have been able to experience the quintessential scenery of Colorado’s Western Slope. While building along the side of a chasm and in soft soil is a perpetual challenge, some of the most dramatic aspects of construction were tunneling through three different sections of cliff side. The three tunnels run 182, 236 and 530 feet in length, all carved by dynamite and tireless work. With routine upkeep, the road has stood up to the rigors of automobiles and weather for decades.”

According to the National Register of Historic Places, the WPA and PWA also participated in the construction of the road. The entire road has been designated a historic district by the NRHP.

The Los Angeles Illustrated Daily News of December 12, 1933 reported on a terrible accident at a CWA construction site in Colorado near Grand Junction:

“9 Workers in CWA Killed as Blasting Sets Off Avalanche

Grand Junction, Colo, Dec. 12 — (U.P.) — At least nine men were killed and another was injured near here today when blasting operations in the building of a mountain road sent down upon them a mass of rock.

Five of the men were buried beneath thousands of tons of boulders. Three more, seeking to flee before the avalanche, died a more horrible death, falling more than 1200 feet from the mountain road into Monument canyon as the first rocks knocked their feet from under them.

Two men were injured, one of them dying later in a hospital. Running down the road they managed to get almost out of the range of the slide before it struck them. Known dead were Leo Adams, Clyde Van Loan, Frank Winters, John Rupe, Ed Carmichael, Robert Fuller, W. L. Wilkins, Harley Beason and Buster Moreland. All were employed under the civil works program of the federal government and all but Beason lived at Grand Junction. Beason’s home was at Fruita near here.

Buster Moreland died at St. Mary’s hospital here shortly after the accident. Jack Blaisdell, seriously injured was expected to recover. Both lived at Grand Junction. A crew of 50 men, many of them on their first job in many months, were working on the road, a new highway which wound up through Serpent’s Canyon, about 17 miles from here, through Glade park and back to Grand Junction.

Apparently an unusually large charge of powder started the rock slide. Caught completely unawares, most of the men who were killed had not even time to start to run. A section of the road about 150 yards in length, was buried Bobthe slide as it roared into the canyon far below.

Carmichael, Fuller, Wilkins, Rupe and Winters were buried instantly crushed to death beneath the moss. Adams, Van Loan, and Beason tried to run, and were swept over the brink of the canyon to the their deaths. Moreland and Blaisdell were working near the edges of the area struck by the slide and were able to escape its full force.”

According to the National Park Service, CCC crews were also involved in construction. The road is regarded as one of the finest scenic drives in the United States. 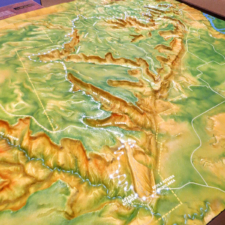 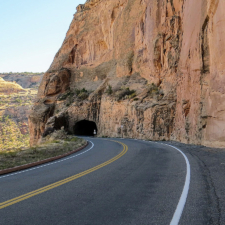 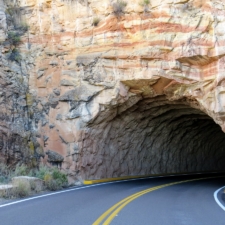 Location notes: Rim Rock Drive is a 23-mile road that winds through the rugged canyons of Colorado National Monument.