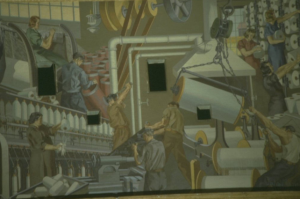 The city of Fall River was originally home to the Wampanoag Native American tribe, but this group was displaced relatively rapidly in the 1600s with the establishment of colonies in modern day Massachusetts, Rhode Island, and Connecticut. The city of Fall River grew during the colonial era, but reached its heyday in the 1800s with the expansion of the textile industry. The fast moving Quequechan River provided an excellent source of water power that helped the city to become known as the “Queen City of the Cotton Industry” in the United States. This rich history was the inspiration for the Mann History of Fall River Murals.

In 1936, the Federal One division of the Works Progress Administration commissioned artist John Mann to create a mural or series of murals depicting the history of Fall River. The Federal One project was intended to provide work for artists, writers, playwrights, and musicians during the Great Depression to ensure that our nation’s cultural heritage did not diminish due to the economic crisis. John Mann studied the history of the city and after four months of intense research began to paint a chronological history of Fall River that spanned from the Native American tribes to the Cotton Industry era. Through the facilities of the Public Library and the Fall River Historical Society and with the cooperation of many of Fall River’s oldest families, he was able to obtain much information concerning early Fall River history. Mann choose the subjects of the paintings at his own discretion and, judging from the finished products, he succeeded in making fascinating choices. The murals were painted in the auditorium of the B.M.C Durfee High School Technical Building (later the Matthew J. Kuss Middle School and currently the Resiliency Preparatory School).

There are three sets of murals, each depicting a different era in Fall River’s history. The first mural series contains six panels about Native American history. The second mural recreates Fall River’s history from the Revolutionary War to the Civil War. The last mural centers on the history of Fall River in the cotton mill era. The opening mural depicts Native Americans fishing before European contact but also shows a ship approaching on the horizon. This ship, according to Professor Delabarre of Brown University, belonged to a Portuguese explorer named Miguel Corte Real, who landed in the area in 1511. The next panel represents a typical Native American village from the time period. Next Mann decided to depict Freeman’s Purchase, in which European colonizers purchased the land that would one day become Fall River from the Native Americans. The fourth panel focuses on the events of King Phillip’s War or Metacomet’s War, an armed conflict fought between the Native Americans and colonists from 1675-1678. The last two panels cover the time between King Phillip’s War and the Revolutionary War, which includes scenes of Slade’s Ferry and a local grist mill.

The next set of panels depicts Fall River in times of war. They begin with the Revolutionary War Battle of Fall River, a minor battle in which the volunteer army of the area held off over 150 British Regulars. The American force was lead by Col. Joseph Durfee, who would go on to start the first textile mill in the city. The next panel recreates the issue of a boundary dispute between Rhode Island and Massachusetts. The city of Fall River’s boundary with Rhode Island had been a source of confusion for many years. In the case of Rhode Island v. Massachusetts (1838), the Supreme Court ruled in favor of Massachusetts and Fall River, granting the city more land. The next panel piece shows Fall River’s role in the Civil War military recruitment. Fall River was a major stop on the Underground Railroad, as well as contributing many troops to the union army.

The third set of murals continues from the late 1800s into the 20th century. One panel entitled “Keeping Alive Tradition and History” depicts a grandfather telling the history of Fall River to his grandchildren, with Fall River landmarks in the background. Another panel depicts the old Fall River legend of the “Skeleton in Armor,” in which  an old set of armor found in the city is rumored to have belonged to an old Norseman adventurer who traveled to the new world long before Columbus.

The residents of Fall River fully embraced the murals and were very happy with the results and the portrayal of the city’s history. This project put an aspiring artist to work, and it galvanized pride in the city from its residents. The murals are a great piece of Fall River history and must be preserved. 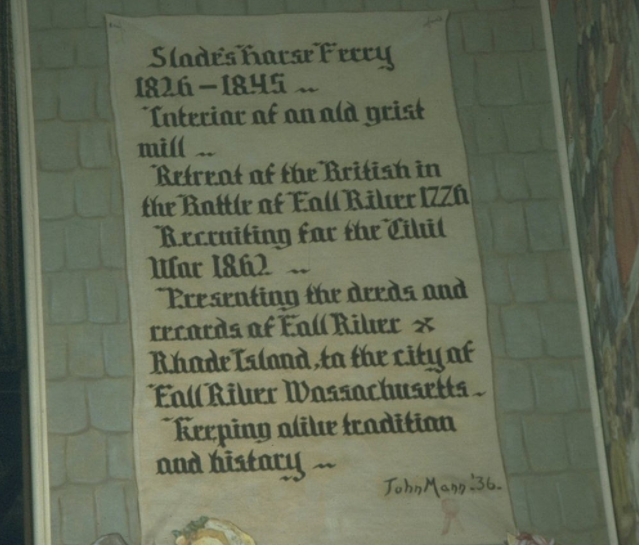 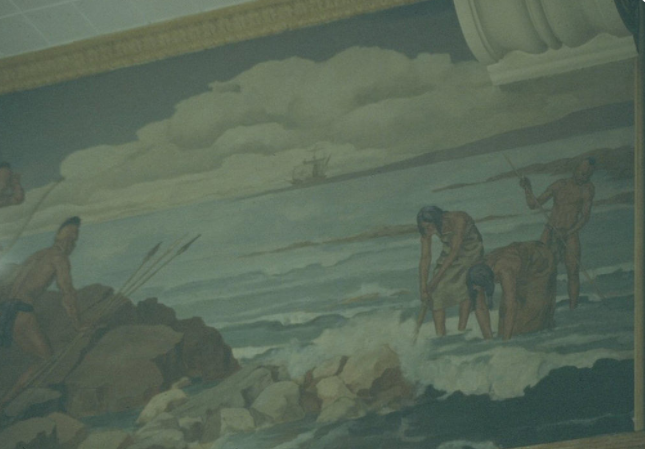