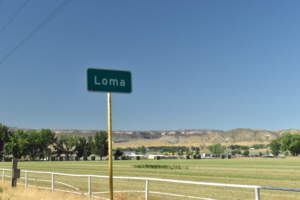 The farmland around the town of Fruita in western Colorado was the site of a Resettlement Administration (RA) project that relocated poor farmers driven out by the Dust Bowl. Some 34 families had been relocated to Fruita by 1937. The official name was the Grand Valley Resettlement Project (also known as the Western Farms Association). (Fruita Community History page)

It appears that another 32 families were relocated to neighboring Loma CO, probably as part of the same Resettlement Project (Wikipedia).  A Community Hall was built in Loma for the new settlers in the area by the Works Progress Administration (WPA) in 1938-40.

We cannot corroborate that the WPA built a library for Fruita.

Project originally submitted by Shaina Potts on May 25, 2016.
Additional contributions by Richard Walker.