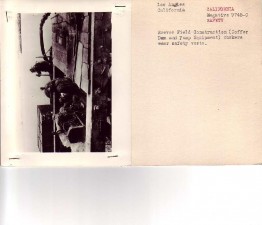 "Allen Field was a small 410-acre civilian airport built in 1927 on a portion of the expanded section of Terminal Island. Terminal Island is a sand-filled island located adjacent to the port of Los Angeles and expanding between the harbors of San Pedro and Long Beach…

The U.S. Navy began its use of Allen Field almost from the very beginning. In 1927 a Naval Air Reserve Training Facility was established there. With the U.S. Naval Reserve Training Camp located across the harbor at the Submarine Base in San Pedro, it was an ideal location. With its large seaplane ramp, the airfield at Terminal Island soon became the primary operating base for seaplanes assigned to ships of the Pacific Fleet.

In 1935 the Navy took complete control over Allen Field and in 1936 designated it as a Naval Air Base (NAB San Pedro) and renamed it Reeves Field, in honor of Rear Admiral Joseph M. Reeves, Naval Aviation Observer and farseeing pioneer in the tactical employment of aircraft carriers.

Terminal Island was one of the first islands seized from Japanese fishermen and cannery workers shortly after Pearl Harbor was attacked."