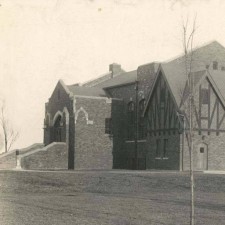 This tudor-style building in Recreation Park was constructed by the WPA in 1936-39, along with a pool and other park facilities:

“In August 1934, the Village of Arlington Heights began to think about constructing a municipal swimming pool for the community. Walter Krause Sr. donated 13.59 acres of land for a park and pool (500 East Miner Street today). But, by September 1935, money for the project was still scarce and plans had yet to be drawn. On the last day to submit plans to the WPA (Works Progress Administration), Trustee Schneberger, Mayor Flentie, and Walter Krause Jr. went over to the WPA board in Niles to present their idea. Trustee Schneberger knew Glenview had been granted their park, so he suggested that the same basic plans be used in Arlington Heights. The WPA granted a 16 hour extension to receive Arlington Heights’ detailed plans. The whole project was put together in five hours to meet the new deadline. Construction began in December 1936. Bonds were issued, through referendum and ordinance, by the Park District to finance its portion of the project, which amounted to $43,400. On May 28, 1939, Recreation Park field house and swimming pool were officially dedicated and, on June 17, these facilities were opened to the public. Other recreational facilities included a shelter house, ice skating rink, croquet court, baseball diamond, tennis courts, horseshoe courts, and shuffleboard courts. This item is part of the collection of the Arlington Heights Historical Society.”   (http://www.idaillinois.org)

Today, the “field house” is in danger of being torn down due to the expense of remodeling for ADA standards.