Source: Annual Report of the City of Montpelier, for the Year Ending January 31, 1939

The facility was described in Annual Reports of the City of Montpelier. The 1939 report [for the year ending January 31, 1939], detailed the park development’s progress at that date:

The Recreational Field … is located on the Worcester Branch road, 1 2/5 miles from the corner of Main and State Street.

The project consists of a Swimming Pool approximately 350 feet long, 150 feet wide and about 11 1/2 feet deep in the center. It will be saucer shape and complete with diving boards and towers in the center, placed regulation distance apart for races, etc. The Pool is connected with a Bath house, completely equipped with lockers, showers and all other necessary equipment. The Pool will contain approximately 850,000 gallons of water. Adjoining the pool is the Playground for the small children.

In the center [of the park] is a regulation Football Field with a small diamond in the opposite corners for the small children.

In the opposite end from the Pool will be the Baseball Field surrounded by a 1/2 mile Cinder Track. The Baseball Field will be regulation size and when completed will be one of the nicest and best in northern New England. The covered grandstand will be of steel and wood, seating about 1,250 and the Bleachers on first and third base seat 1,000 each making a total of about 3300. The Bleachers will be of wood and steel construction, portable so that during the Football season they may be moved to the Football Field for use making a seating capacity there of 2,000.

In the rear of the Baseball Field will be the Tennis Courts. There will be also ample parking space for many hundreds of automobiles on the Field.

The Committee in charge of the above prescribed project known as P. W. A. No. Vt. 1088F [was] appointed by Mayor Hall …

The [January] 1940 city annual report stated: “The past year has marked the completion of the Recreational Field …” A P.W.A. report stated that construction work was completed on Nov. 7, 1939.

While the baseball field and grandstand facility on-site has been referred to as “Recreation Field,” even on a state historical marker, this was just one part of the greater park project—which included a pool, bath house, and football field—that the City of Montpelier originally referred to as Recreation Field. 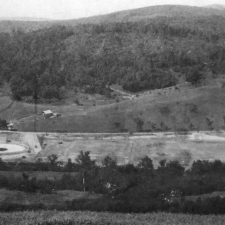 Pool at left, baseball field at right. Source: Annual Report of the City of Montpelier, 1940, cover