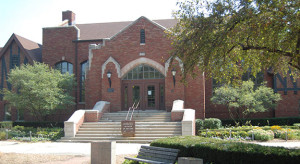 The Arlington Heights Recreation Center, which was built between 1936 and 1939, was created through the Works Progress Administration.

The idea for the project was first conceived in 1934, but financial support did not become available to start the building of the Center until 1936. The community could not fund the project on its own, but it still wanted to provide its citizens with some sort of community recreation center. When a straw vote failed to pass the plans for a public swimming facility, Arlington Heights reached out to officials in Washington and of the WPA for $200,000 in funding to build such a facility. The money would go towards the construction of the desired swimming pool, as well as a field house. The plan was to create a fully-landscaped park and facility that would be able to provide space for baseball, football, tennis, and other sports, as well as the recreational pool.

The WPA ended up accepting Arlington Height’s request for financial aid for the creation of a community center. By 1936, architectural plans had been drawn up, the community was able to finance its portion of the project, and over the next three years, the Recreation Center was constructed and landscaped.

The facility was officially opened up to the public on May 28th, 1939. As well as offering community members a pool, Recreation Park also provided an ice skating rink, a baseball diamond, tennis courts, and other areas for various sports.

Admission to the swimming pool at the time was 10 cents for a child, 20 cents for teenagers and 25 cents for adults. The pool and its facilities were well-received by the public. As the popularity of the Recreation Center grew, the Arlington Heights Park District began offering season discounts for admission to the pool. Swimming and diving competitions were among events that were held at the pool.

During 1943, the pool was forced to close early in the year because of a nation-wide polio outbreak, and facility-attendees feared catching the disease. By 1947 though, eight years after its opening, it was estimated that around 37,000 people visited the pool during that summer alone.

Today, the field house and Recreation Center are still standing. Several pools have been added to the Recreation Center to allow for popular summer swimming programs over the years, and the pool is still one of the most popular community attractions.

Project originally submitted by Melissa Petersen on May 13, 2015.