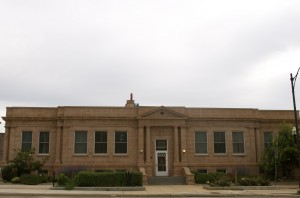 “The Rapid City Carnegie Library was constructed in 1915 at what is now 700 Kansas City Street. The library became part of the WPA legacy when workers carefully constructed matching extensions on each side of the central portion. Completed in 1938, the slightly recessed additions used the same yellow limestone that constituted the original structure and two window bays were added to each side. Pilasters and columns completed the corners of the extensions and complimented the rows of small windows that were located above the bookcases on the inside walls. Vacated after the completion of a new public library in 1971, the building housed Rapid Citys police force during construction of the Public Safety Building. TSP Architects and Engineering currently occupy the building at the corner of Seventh and Kansas City Streets. The Carnegie Library is within one block of Rapid Citys downtown main streets that showcase the presidential statues, one of which is President Franklin D. Roosevelt.”