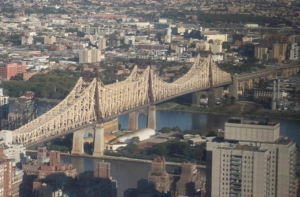 New York City’s Queensboro Bridge, which connects Long Island City in Queens with Manhattan, was improved by the federal Work Projects Administration during the 1930s. The bridge is also called the 59th Street Bridge or, more recently, the Ed Koch Queensboro Bridge.

A WPA report from 1940 described its work: “Repaving of the Queensboro Bridge, an example of the improvement made to New York City’s bridges. The old paving was of wood blocks and had become dangerous, particularly in wet weather. This was replaced by a concrete paving on a special I-beam grid. The lower roadway was completed in 1937 and, after this had been reopened, work was begun on the upper roadway, and completed in 1938. The main span is 3,725 feet long and there are approaches of some 6,300 feet to both roadways. Both roadways are two lanes. The work cost approximately $1,500,000.

Besides the repacing, the WPA completed the granite tops of the four main towers of the bridge, left unfinished when the bridge was built over 20 years ago. This entailed setting some 170 granite blocks, averaging four tons each.”