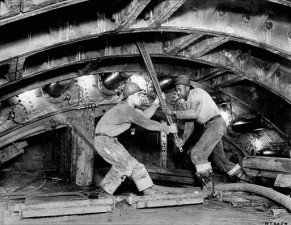 Sandhogs tighten a bolt in a tunnel–lining ring. Six cylindrical jacks on the back of a shield are visible behind the men. Photographer: Michael Bobco for Somach Photo Service. Feb. 26, 1939. Courtesy of MTA Bridges and Tunnels Special Archive

The Queens–Midtown Tunnel was completed with the assistance of a $58 million Public Works Administration grant approved by Franklin D. Roosevelt:

“In 1935, with the promise of $58 million in Public Works Administration loans made available under President Franklin D. Roosevelt’s New Deal programs, then Mayor Fiorello LaGuardia created the Queens Midtown Tunnel Authority, telling the new agency’s three–members, “You are starting from scratch with no appropriation and nothing but an idea and a law.”

Ground–breaking for the Midtown Tunnel took place Oct.2, 1936 with the push of a ceremonial button by President Franklin Delano Roosevelt. Over the next three years, the tunnel’s two tubes were excavated using dynamite, drills and four circular cutting shields, about 31–feet in diameter, which were lowered into shafts at each end of the tunnel and hydraulically shoved through the riverbed until they met in the middle…

On Nov. 8th, 1939, Mayor LaGuardia pulled a switch to blast the last six feet of rock between the Manhattan and Queens shields in both tubes. A year and one week later, opening ceremonies were held on the Manhattan toll plaza, attended by President Roosevelt, who was the first person to drive through the new tunnel. Other attendees included Mayor LaGuardia, Sen. Robert Wagner, and the tunnel’s Chief Engineer Ole Singstad, a well–known tunnel builder who finished building the Holland Tunnel after the death of its original engineer.”

The Queens-Midtown Tunnel is one of a triad of tunnels built by the New Deal to provide better traffic access to Manhattan from Queens, New Jersey (The Lincoln Tunnel), and Brooklyn (The Brooklyn-Battery Tunnel). 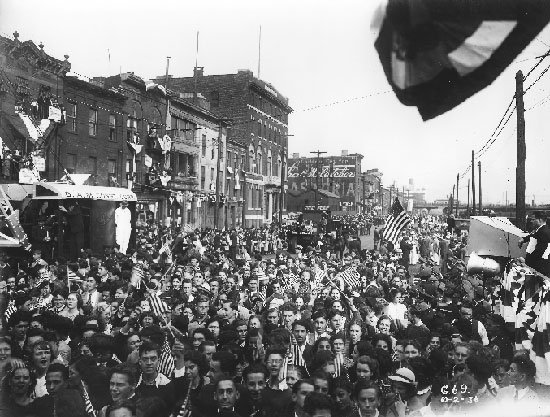