The Astoria branch of the Queens Borough Public Library received a series of murals as well as accompanying sculptures under the Works Progress Administration (WPA)’s Federal Art Project.

“[T]here was no controversy about the playful mural commissioned in 1938 for the children’s reading room of the Queens Borough Astoria branch, which celebrated the centennial of its building last year. Painted by Max Spivak (1906-81), an artist little known today, the mural, depicting whimsical circus and opera puppets, was originally done in five parts. But three have been lost, as have all of the original polychromed figures, by the sculptor Eugenie Gershoy, that had accompanied it.

Still, the two parts that remain, recently restored by the Adopt-a-Mural program of the Municipal Art Society, have a toylike appeal. One, “Grande Finale of an Opera,” depicts puppet singers in declamatory poses with an orchestra led by an intense conductor; the other, “Circus,” presents a juggler, acrobats and a clown doing their stuff, abetted by a donkey and a penguin.”   (www.nytimes.com)

A friend of Max Spivak’s, Eugenie Gershoy “decided to create colorful figurines to go along with Spivak’s paintings. These sculptures depicted circus characters posed in a variety of impossible feats, including the figures in Ill-Fated Toreador, who dangles precariously from a bull’s horn, and The Very Strong Man, who lifts an elephant above his head while balancing on one toe. The library was so pleased with the work of Gershoy and Spivak, they rebuilt the space into an oval to emphasize the circus setting. “I began to explore the use of color . . . to intensify gesture and expression, to accentuate movement, heighten dramatic effects, [and] enhance the imagery.””   (https://dp.la) 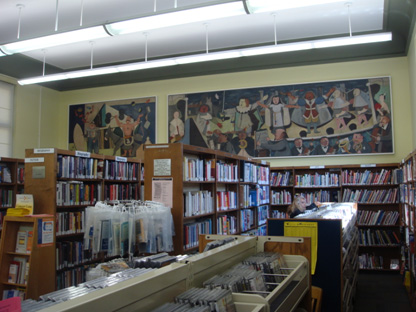