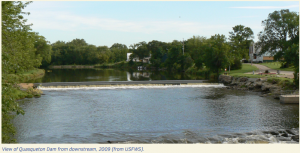 Plans for the Quasqueton Dam were developed in May and June 1934, shortly after the CWA ended. Federal funding was initially provided by FERA. However, the construction took much longer than originally planned, so the completion of the dam was funded in the fall of 1935 by the WPA. As with other New Deal dams in Iowa, the material was supplied by the State Fish and Game Commission, and the labor by the federal government (FERA or WPA). Construction started in June 1934. The dam was 6½ feet high and 250 feet long. It was identified in newspapers more than once as a rock dam, but one article described cement (probably actually concrete) being poured into forms for the dam, so it may have been constructed of both rock and concrete.

It is not clear which engineer was responsible for the dam’s design. Newspapers mentioned that a state engineer, Mr. Baumer, conferred with local relief officials on the project and visited the site at least once. But the Buchanan County engineer, R. W. Gearhart, also visited the construction site, so it is not clear what roles the two engineers had in the design.

Although it was originally expected that the dam would take about five months to complete, construction actually took much longer. Work was delayed in November 1934 when the uncompleted dam was damaged by high water. Work resumed in spring 1935, but for unknown reasons the dam was not completed using FERA labor. It may be that the federal government began winding down FERA funding after the WPA was established in May 1935. Whatever the reason for the delay, WPA funding to complete the dam was obtained in October 1935, and the dam was completed on November 11, seventeen months after construction began. The Quasqueton Dam remains in place, but it was covered in 2014 by broken concrete and rock arranged in a series of downstream arcs to create a rock rapids. This was done to aid fish passage and to prevent dangerous undertows.