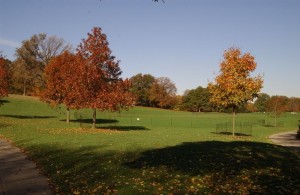 In August 1941, the WPA completed the construction of extensive improvements to Prospect Park in Brooklyn. The work was focused along the West border of Prospect Park between Garfield Place and 15th st., where the WPA built “marginal playgrounds, two sitting areas with sand pits, walks and bicycle path” to supplement the new bandshell, which had been added in 1939.

Specifically, this work included: “a semi-circular sitting area, 100 feet in diameter,” with “a large central sand pit and a continuous row of benches for guardians of the children“ opposite 13th St., as well as a similar sitting area and sand pit across from Garfield Place; a new playground between the Litchfield Mansion and West Drive (probably the Third Street Playground) and another at 5th St. and Prospect Park West (identity and status unknown); new trees; a new path system; and a 12′ wide bituminous surfaced bicycle path, 4,400 feet long.”

In addition to this work on the West side of the park, the WPA built a new playground at Lincoln Road and Ocean Ave. along the park’s East edge, along with a comfort station, landscaping and new paths.

The press release announcing the completion of these projects concluded that:

“In connection with the development of all of these areas additional drainage facilities were installed, irrigation provided and 10 acres of lawn area were seeded.

The work was carried out by the Work Projects Administration from plans prepared by the Department of Parks.”