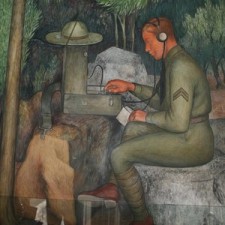 “A notable artistic feature of the Main Post Chapel is a large fresco painted in 1935 by Victor Arnautoff and his assistants. With St. Francis at its center, the mural depicts a historical pageant related to the founding of the Presidio and the peacetime activities of the Army. Recognized as a leading artist of the period, Arnautoff painted the murals at Coit Tower on Telegraph Hill and in Washington High School, and taught graphic arts at Stanford.

“Victor Mikhail Arnautoff was born in the Ukraine in 1896. He served as Cavalry officer in Czar Nicholas II’s army, received the Cross of the Order of St. George for valor, and escaped to Manchuria to avoid the Bolshevik Revolution.

“Once in San Francisco, Arnautoff was appointed technical director of the Coit Tower fresco mural, a project of the Works Progress Administration, which was completed in late 1934. In December 1934, Arnautoff was appointed to do a fresco for the east wall of the Presidio Chapel under the State Emergency Relief Administration (SERA). A December 30 Examiner article reports:

“The design will measure approximately 13 feet by 34 feet,” Arnautoff informed me. “In the central panel (B), which will be devoted to religion, will be the figure of St. Francis surrounded by trees. On the left side (A) will be depicted the early history of California; on the right (C), the Army today occupied in the development of science, the radio, (D & E) Army engineers examining the project of the Golden Gate Bridge, and approving the construction.”

Arnautoff is a product of the California School of Fine Arts. His foundation in fresco painting came from Ray Boynton. Then he went to Mexico where there are large spaces to paint, and studied with Diego Rivera. This was before Rivera left his footprints, metaphorically speaking, in San Francisco.

“When Rivera came to San Francisco,” Arnautoff added, “he left me in charge of the wall decoration in the National Palace. I also worked with him in the Palace of Cortez at Cuernavaca. With practical experience, under his guidance, I became familiar with the chemical composition of plaster and the principles of mural painting.”
(San Francisco Examiner, December 30, 1934)

“The public and the press were delighted with the mural. A June 23, 1935, Examiner article reports, ‘Arnautoff has done admirable work. His design is sound both in detail and in the large. His decoration is bright, interesting, appropriate. The fresco is ideally located. It is easily visible from end to end. It looks over a vista of Presidio and bay. People will be visiting it for many a day.’

“The mural was sponsored by the officers of the Thirtieth U.S. Infantry, according to the State Relief Administration Review of Activities 1933?35, where it is listed as Project Number 2-F3-100 – public works of art.

“Historical figures are depicted in the mural. In the upper left we see Maria de la Concepcion Marcela Arguello, born in the Presidio in 1791 and betrothed at the age of 15 to Russian Chamberlain Nikolai Rezanov. Her father, Presidio Commandante Don Jose Arguello, stands behind them. Theirs is a story of romance and tragedy, as Nikolai died riding horseback across Siberia to obtain royal and ecclesiastical permission for their marriage. A locket he wore was eventually returned to Concepcion, proving he died loving her. She was the first native daughter to become a nun, entering the Dominican Order in 1851. She died in 1857 and was buried Christmas Eve at St. Catherine Convent in Benicia.

“The right side of the mural shows some of the peacetime activities of the Army – developing radio communications, fighting forest fires, and through its Corps of Engineers, designing the locks at the Panama Canal. Planning the Golden Gate Bridge is depicted with the officer showing great disdain on his face. We see the bridge design calls for the removal of Ft. Point. The bridge was built five years later in 1938 with an arch over Ft. Point, saving the historic site for the enjoyment and education of many generations to come.”   (http://www.interfaith-presidio.org) 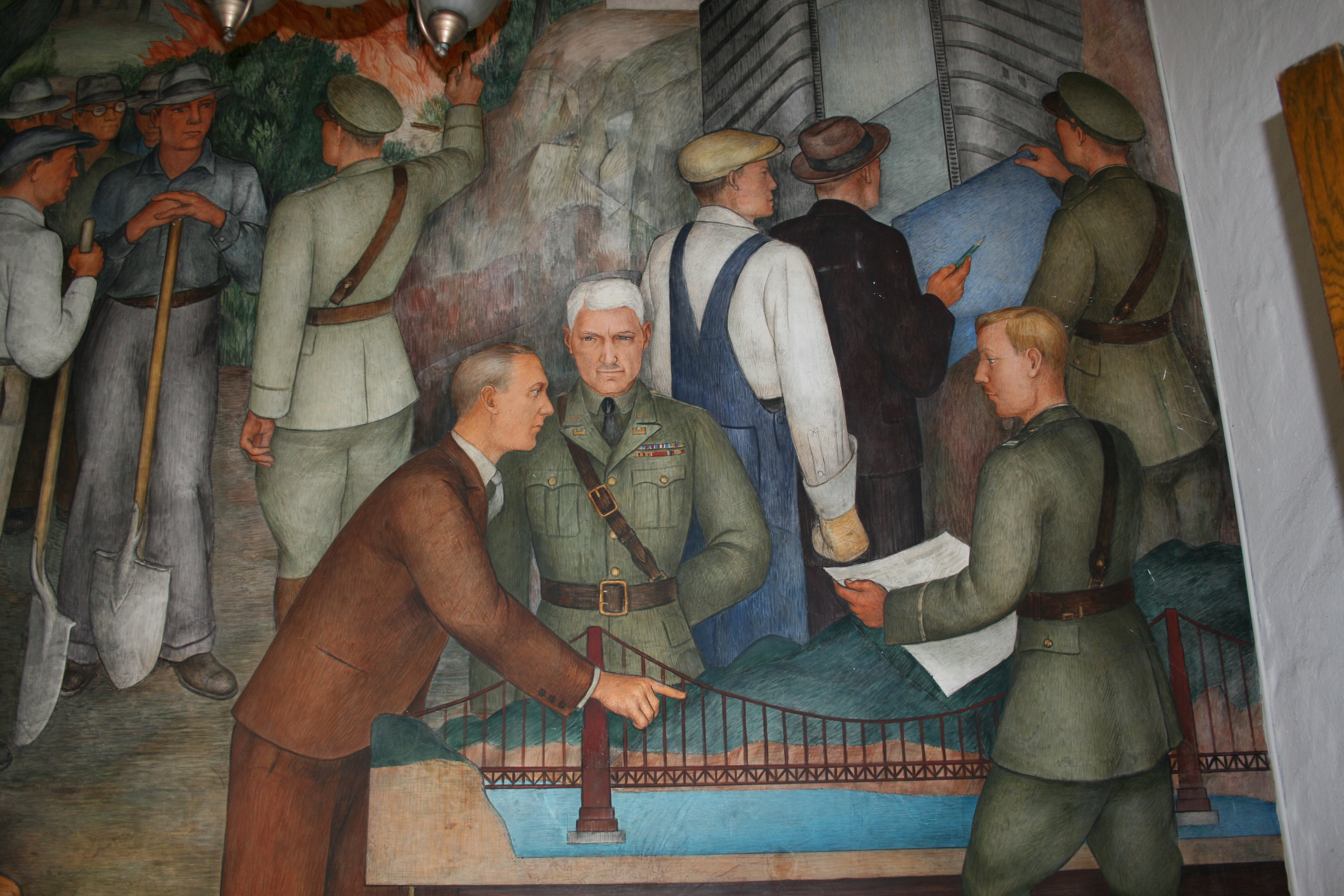 Location notes: Mural room is to the left as you enter