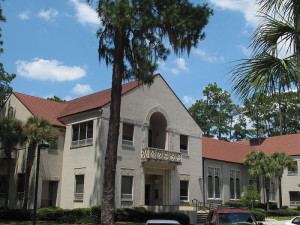 “Dedicated by Mrs. Eleanor Roosevelt in 1941 as Georgia State Women’s College Library and officially named for Richard Holmes Powell, the first president of the institution, in 1947. It served as the library for the college for 30 years before Odum Library was constructed. Powell now houses an auditorium, the offices of Career Services, Co-op Education, Testing, Housing, the Counseling Center, and Alcohol and Other Drug Education.” (Wikipedia)

The building “represented the fifth project designed for the campus by the firm of Edwards and Sawyard. Later, the completed building was dedicated by First Lady Eleanor Roosevelt in 1941 …” (Wikipedia)