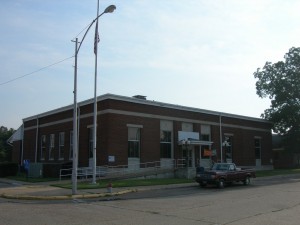 Built in 1936 with Treasury Department funding.

“On September 28, 1935, the Wynne Daily Star Progress reported that a lot on Merriman Avenue was picked as the site of a new post office for Wynne. Post Office Inspector Floyd Elliot recommended the location, and the Department of the Treasury paid Mrs. Lizzie Collins $6,000 for the property.

A January 10, 1936, article noted that a cap of $65,000 was placed on construction costs of the structure, projected to be a one-story structure with a basement. Though the January article predicted a swift beginning to construction, it was summer before work began. An August 19 Star Progress article quoted construction superintendent C.W. Saffell of the Farnsworth Construction Company of New Orleans as saying the building would be ready for occupancy by the first of the year. This proved a bit ambitious: a December 31 article said interior plaster work was just beginning and that Wynne Postmaster Clarence Coffin was hoping to move into the new structure in late February or early March. Ultimately, the building did not open until late April, a delay ameliorated in part by a decision to keep the new building open until 7 p.m. each night instead of closing at 6 p.m.” (http://www.arkansaspreservation.com)