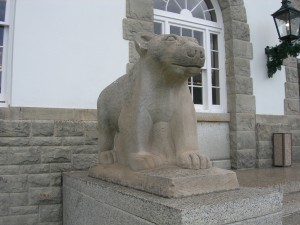 The historic post office for Yellowstone National Park, located at the Mammoth Hot Springs community near the north entrance of the park, is home to an example of New Deal artwork: two stone sculptures entitled “Young Grizzly Bears,” created by Gladys Caldwell Fisher. Commissioned by the federal Treasury Section of Fine Arts, the works flank the front entrance to the building.

Fronting the post office at Mammoth Hot Springs in the Park are a pair of carved stone grizzly bear cubs. The two animals are the work of Mrs. Gladys Fisher, a Denver artist who completed the commission for the Treasury Section between 1939 and 1941. A native of Colorado, she had studied professionally in New York and Paris, and when invited to do the Park sculpture she had already completed a similar decoration for the entrance of the Denver post office. In its invitation to Mrs. Fisher, the Section outlined the commission: the sculptures were to be of animals characteristic of the Park; the medium, stone or artificial stone; the total allocation, $2000. The artist gathered her information. She suggested the bear as an appropriate animal and urged that carved, rather than cast stone, be used. Her cost estimated exceeded that of the allocation by about $500 however, and though “terribly interested” she was reluctant to undertake the job. A further exchange with the Section made clear that the allocation could not be raised and the artist agreed to work the problem out in her second choice, artificial stone. She submitted sketches and obtained bids on the materials, in the course of which she determined that using Indiana limestone and working from small scale models she could avoid the cast stone alternative and just “break even.” The Section was pleased with the preliminaries but at this point circumstances disrupted the artist’s work. An emergency appendectomy and subsequent complications kept Mrs. Fisher from work on the commission for about six months. Despite the delay, the section held the commission for her; in February with her scale models completed and approved, she received her formal contract. Paid in installments as each of the three-and-a-quarter ton sculptures was set in place, the artist was allotted 486 days to complete the project. Her problems continued however; costs of stone cutting and transportation absorbed nearly three quarters of her commission with other expenses leaving less than $200 for the artist’s pay.

The stone cutting firm in Indiana sent photographs as its artisans worked from the models and Mrs. Fisher forwarded the pictures to the Section. The arrangement was not altogether satisfactory and the Section had reservations about the sculpture as it appeared in the photographs, but it was understood that the artist would do a final touching up of the surfaces as the figures were installed.

Circumstances again intervened. There is in the Section files the announcement of a baby girl, born to the Fishers in the spring of 1941. Still, by September the limestone bears were finally set in front of the Park post office. The artist had carefully arranged the details of their installation but she found it impossible to supervise the job at the site and thought a final treatment of the surfaces superfluous. Would final photographs of the job suffice for the completion of her commission, she asked. The Section asked for such pictures and on their receipt wrote that the work seemed excellent.” There is no record of a final carving.

Somewhat later, however, the postmaster in the Park gave his unvarnished appraisal of the work:

“These Sculptured Bears’ resemblance to real bears is rather vague, especially here in Yellowstone Park where bear [sic] are so common, and everybody is very familiar with real bear. “Mrs. Fisher’s conception of a bear must be rather vague” is the opinion of most of the residents of Yellowstone Park. … The Bears do greatly improve the appearance of the Building tho, and the Bears are welcome additions. …”