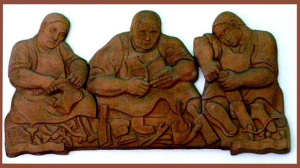 The Terra Cotta relief entitled “Shoemakers of Stoneham” was carved by William Zorach as a part of the New Deal Section of Fine Arts program funded by the Treasury Department. “[The relief] depicts three men diligently working away constructing shoes. Around them are the tools of their trade: knives, awls, lasting hammers, thread, leather, wooden lasts, pincers, stirrups and lapstones…”

“In selecting a theme for the new Post Office in Stoneham, William Zorach chose to celebrate the skilled artisans of Stoneham’s pre-industrial past. The three shoemakers depicted in the wall sculpture above the Post Master’s door hearken back to a time when shoes were handmade by skilled craftsmen called cordwainers . As far back as the 18th century, Stoneham was known as a town were many cordwainers lived and worked. The title itself carried prestige. Cordwainers were respected citizens, who operated their own independent shops and often trained apprentices in the craft.”