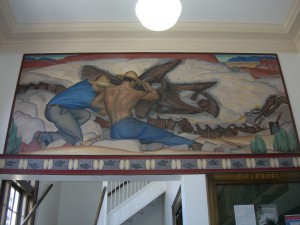 The historic post office in Kemmerer, Wyoming houses multiple examples of New Deal artwork: three oil-on-canvas murals painted by Eugene Kingman in 1938. The works, which were commissioned by the federal Treasury Section of Fine Arts, can be viewed in the post office lobby. Their titles are “Cretaceous Landscape,” “Tertiary Aquatic Life,” and “Excavation,” respectively.

In July, 1937, the Section invited Eugene Kingman to submit plans for a set of murals to decorate the post office in Kemmerer, Wyoming. The commission was a small one — $660 — and King- man’s earlier work, submitted in competition for work at Mesa Verde National Park, brought him the job. The artist journeyed to Kemmerer, surveyed the locale, decided on the subject matter for his murals and then went to Providence, Rhode Island, to work out sketches and scale drawings for his painting. He was allotted 216 days to complete the work and the commission was to include all costs.

Kingman chose for his murals scenes illustrating the fossil beds around Kemmerer, their excavation and the kinds of prehistoric life found in them. Working his ideas into pilot drawings, the artist found it necessary to satisfy the Treasury Section people as well as himself. The work went through several revisions; at one point, the Washington office wrote the artist as follows:

“Your revision has been studied by the members of the Section and it is our feeling that by placing the figure where you have, you have sacrificed some of the drama of the original design. … It is our suggestion that you move the new figure much farther down in the composition on a diagonal leading from left to right.”  The artist accepted the suggestions and by June of 1938 his work was completed.

The murals installed, Kingman was pleased with his work and local reaction to it. ‘I wasn’t sure how much of an appeal dinosaurs would make for these people,” he wrote to Edward Rowan in Washington, but he added he was speaking to the local Lions club that evening on the whole business of the murals and the work that had gone into them. Kemmerer’s postmaster, Andrew Morrow, was enthusiastic in his praise of the paintings. The artist had put in long hours to see that the work was done as it should be, and his cooperative spirit had also impressed Morrow. “It was a pleasure to know such a man and to see his work,” he wrote. The murals centered on a subject of local interest and they had already received much favorable comment. The Kemmerer Gazette echoed the postmaster in an article describing the paintings and commending the artist “on his talented work.” Kingman himself thought the incorporation of geological motifs into the mural had been a most interesting problem to work out. Three years later, then Director of the Philbrook Art Museum in Tulsa, he asked the section for some of his preliminary Kemmerer drawings; he planned to use them in lectures on the problems of mural painting. 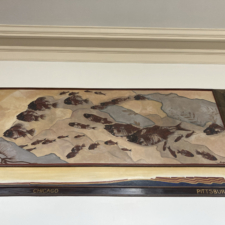 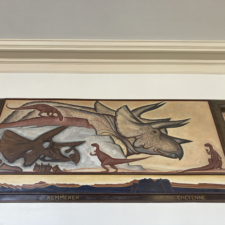 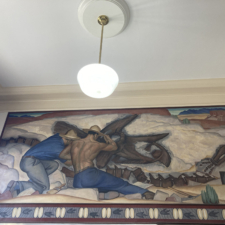 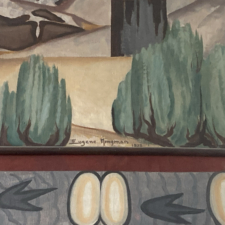