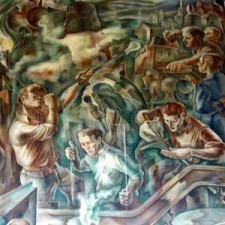 Alexander J. Kostellow painted these oil-on-canvas murals, entitled “Battle of Bushy Run” and “Glass Industry,” in 1938, based on designs by Frank T. Olson and funded by the Treasury Section of Fine Arts. They are viewable in the Jeannette post office lobby.

“THE POST OFFICE MURAL in Jeannette, Pennsylvania, was the design of one artist and the product of another. The Battle of Bushy Run was originally conceptualized, researched and drawn by T. Frank Olson [sic.], who died only days after his designs were approved by Washington, DC. The son of Norwegian immigrants, T. Frank Olson travelled to Bergen, Norway in his youth to study art. Upon his return to the United States, he continued his studies at the Pratt Institute in New York City. Under the direction of Samuel Rosenberg, an art instructor at the Carnegie Institute of Technology (now Carnegie Mellon University), Olson studied mural decoration and received the highest honors in his class. When the competition for the Jeannette Post Office mural was announced, Olson applied himself wholeheartedly to his design. He is reported to have spent hours each day in the art reference room of the Carnegie Library researching the Battle of Bushy Run, as well as speaking to subject matter experts. He claimed that conceiving of the idea was nothing compared to making each detail authentic. A preliminary local jury approved his designs, followed by the final selection of his designs in Washington. Unfortunately, Mr. Olson died on September 7, 1935, days after signing the contract for his mural. His obituary describes his artistic style as ‘marked by strength,’ featuring bold strokes and an ‘unusual aptitude for filling in space.’…

“Mr. Olson may have chosen the Battle of Bushy Run as his subject matter for its local significance, as it may be the first historical reference to the area that the town now stands on. It is regarded as the turning point in Pontiac’s War, one of the most significant conflicts between Europeans and American Indians in the 18th Century. The Battle of Bushy Run was fought one mile east of Bushy Run Station in western Pennsylvania on August 5th and 6th, 1763. The hostilities were led by a British column under the command of Colonel Henry Bouquet against a combined force of Delaware, Shawnee, Mingo, and Huron warriors to protect Fort Pitt. Colonel Bouquet himself had met with the chiefs of the Delaware Indians at Fort Pitt in 1758, where the Delaware were assured of the peaceful intentions of the King of England and his people toward them. Tamaqua, Shingas, and Keeyuscung of the Delaware traveled to attend this meeting. Keeyuscung and his son, Wolf, would both die at that same location only 4 years later. Another meeting in 1759 was accompanied by provisions and arms. It was the policy of the English Government to use every effort to conciliate the Indians and keep them on good terms. The British had recently promised to retreat from the Ohio valley, stating ‘We are not come here to take possession of your hunting country in a hostile manner…but to open up a large and extensive trade with you and all other nations of Indians to the westward who choose to live in friendship with us.’ However, by 1761, the British under General Jeffrey Amherst, commander of all British forces in North America, pronounced a new policy halting gift giving and provisions as a means of negotiating and continued to allow settlers to cross the Alleghenies in violation of the 1758 Treaty of Easton. Pontiac was an Ottawa chief in the Detroit area who had resisted British policies and control. In 1763, Indian forces began attacking British outposts in what came to be known as Pontiac’s War. By July 1763, Pontiac’s forces had captured 9 forts and forced the abandonment of another. They were then laying siege to the major forts of Fort Detroit and Fort Pitt. Early in 1763, the Delaware had begun to attack settlements near Fort Pitt, drawing the infamous Colonel Bouquet back there to defend it. Indian scouts observed Bouquet’s army marching west along Forbes Road and, upon hearing this, the forces surrounding Fort Pitt chose to temporarily end their siege and attack Bouquet and his men before they arrived. The attack resulted in a victory for the British. Bouquet and his forces relieved the garrison at Fort Pitt, lines of communication from the frontier were restored, and Pontiac’s War turned in favor of the British.” (postal museum.si.edu) 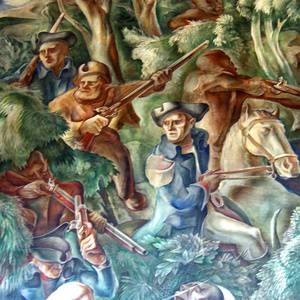