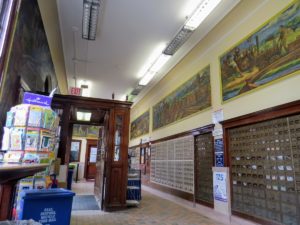 The historic Honesdale post office houses an impressive set of New Deal murals. The works, respectively titled “Canal Boat,” “Clearing the Wilderness,” “Coal,” “Gravity Railroad,” and “Visit by Washington Irving,” were installed by artist Walter Gardner in 1937, under the auspices of the Treasury Relief Art Project (TRAP). Each oil-on-canvas panel depicts a scene from local history. The murals occupy three walls of the customer lobby, including the space above and around the front entrance to the building.

The walls of the lobby of the Honesdale Post Office have been decorated during the past few days by placing several beautiful murals depicting some of the history of Honesdale.

These panels, done in oil, were painted by Walter H. Gardner of Philadelphia. Done on canvas during the past year, the artist received the commission under the section of Painting and Sculpture, Public Works Branch of the Treasury Department, Washington, D.C. and known as Treasury Relief Art Project.

Mr. Gardner came to Honesdale during the early part of 1926, interviewed old residents of the town. He spent several days in the Wayne County Historical Society Museum, Honesdale where he perused pictures of the Delaware and Hudson Railroad, read history and gleaned other information and knowledge of Honesdale, which have been woven into the pictures. …

Before the murals were brought to Honesdale, they were exhibited in Corcoran Gallery, Washington, D.C. for a month; also they were shown in Whitney Museum, New York where they were greatly admired.

The section of the wall over the door to the entrance of Postmaster C. H Rettew’s office an early setting is shown. The canal, a boat, drawn by a horse and a driver, nearly occupies the greater part of the scene. In the background, there are churches and homes, while at the left stand two men. They represent Phillip Hone and Washington Irving [text obstructed / page not documented by contributor] …

Mr. Gardner entered several contests with little success, but by his unflinching tenacity of purpose was awarded the commission for the Honesdale post office murals. He gave up his work with the newspaper and devoted his time to research and painting.

Gardner’s works have been shown at the American Academy Shows, the Art Institute of Chicago and Whitney Museum and Rockefeller Center, New York City.

Mr. Gardner was at the post office on New Year’s Day 1937. Also here was L. A. D. Montgomery, Treasury Relief Art Project, Philadelphia; Fred L. Miller, Washington, D.C. and Ballard Jamison, Washington, D.C. Ballard and Miller remained until the murals were completed. The latter was in charge of installation. 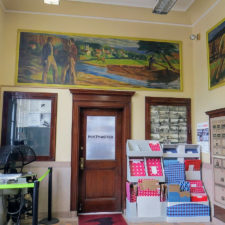 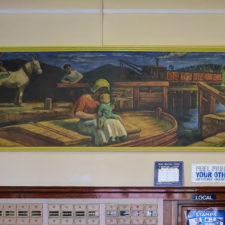 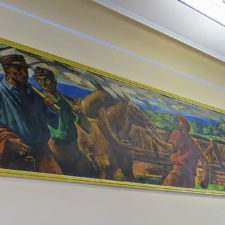 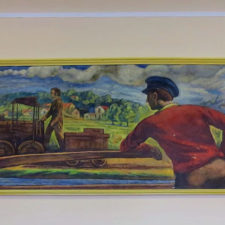 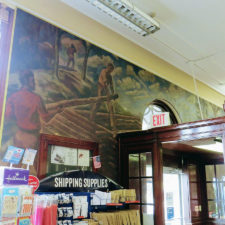 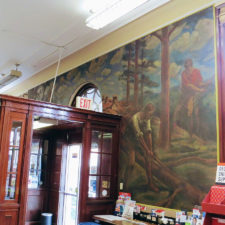