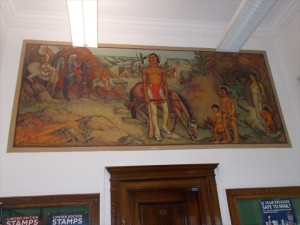 The historic post office in Watonga, Oklahoma houses New Deal artwork. The oil-on-canvas mural, entitled “Roman Nose Canyon,” was completed by Edith Mahier in 1941 and installed in the post office lobby, where it is still viewable today.

From the National Register of Historic Places nomination for the mural (via Waymarking.com):

Edith Mahier was born in Baton Rouge, Louisiana in 1892. She received a Bachelor of Design degree from Newcomb Memorial College School of Art in 1916 and accepted a professorship in the art department at the University of Oklahoma (OU) the following year. Around 1926, Susie Peters, Kiowa Field Matron, showed the drawings of the Kiowa artists to Mahier, who then encouraged Oscar Brousse Jacobson to enroll the men in special classes at OU. She instructed a number of Native artists in the following years, including Acee Blue Eagle and Dick West. Mahier’s experience with Native American design inspired her to collaborate with her sister, Frances Brandon, on a fashion line for Nieman-Marcus of Dallas. The Native-inspired designs gained in popularity throughout the 1940s and prompted her to showcase successive lines in annual fashion shows. This led the OU administration to transfer her to the School of Home Economics in 1950s, where she completed her tenure.

Her Watonga Post Office mural, Roman Nose Canyon, is perhaps the best known of all New Deal murals in Oklahoma. Mahier skillfully incorporated local history and contemporary tourism in Roman Nose Canyon. It depicts both the Cheyenne’s onfrontation with American settlers following the land run, and the surrounding landscape of Roman Nose Canyon, which had been the winter camp for the Cheyenne and was quickly becoming a contemporary destination for campers and naturalists. In the mural, Chief Henry Roman Nose stands at center with his wife, children, and fellow tribal members nearby. Roman Nose, or properly translated “Arched Nose,” was one of the most prominent Cheyenne leaders during the Indian Wars of the 1860s. He was noted particularly for his headdress made with one buffalo horn and a train of black and red eagle feathers, which Mahier chose to omit in favor of a single feather. The Cheyenne, who have come to water their horses, encounter settlers who have also come to water their livestock.

For Mahier, the confrontation spelled the end of traditional Cheyenne life and she penned the following narrative of the scene: “The settlers, also in search of water, have stopped their covered wagons near the stream, while they scan the horizon envisaging the gypsum pits, the flourishing wheat fields, and their future city with its churches, school, homes and business houses. The young Indian stands holding his rifle, his defiance gone, but in its place wonder, … for he is old enough to realize that he may never achieve those honors which his father and grandfather held dear; that he must find his place under a new system” (quoted in Silberman 1988, 388). As such, Roman Nose Canyon examined the familiar theme of the “vanishing race,” which had received treatment in other New Deal murals.

Its notoriety came from the sensation that the Watonga Chamber of Commerce staged following the mural’s installation. Gerald Curtin, owner and publisher of the Watonga Republican, organized a nine-day protest in June 1941 involving Chief Red Bird, grandson of Black Kettle, his wife Prairie Woman, and their children. Red Bird expressed his distaste for the mural in state papers through an interpreter Joe Yellow Eyes. The Cheyenne protesters condemned Roman Nose’s physique as that of a “Navajo jellybean,” his absence of a proper headdress, and his breech-cloth as too short. Mahier responded that “I entered the competition mainly because few Oklahoma artists were participating and they were sending out this way eastern artists who were putting English saddles on Indian ponies. At least I didn’t do that.” Her anxieties may have been calmed by Curtin’s assistant at the Watonga Republican, Ernie Hoberecht, who confided: “It’s a publicity stunt … and everyone knows it is a joke. In fact, it’ll probably make you more famous than you already are” (quoted in Marling 1982, 279). Indeed, the Cheyenne protest received lighthearted coverage in
The Washington Post and Chicago Sunday Tribune (Silberman 1988, 374-376). Despite her presumed errors in the mural, Mahier was fairly familiar with Native American culture. She even offered to repaint some sections of the mural, but never did.