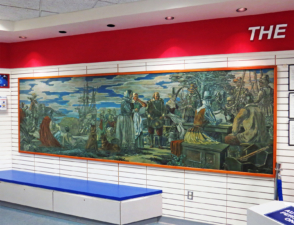 During the Great Depression the federal government commissioned a mural upon completion then-new post office in downtown Virginia Beach. The work by John H. R. Pickett was completed in 1939 with funding from the Treasury Section of Fine Arts, and it is alternatively known by two titles: “The Arrival of the First White Women at Jamestown” and “Old Dominion Conversation Piece.”

The artist was paid a total of $710 for the mural: $200 once the preliminary sketches were approved; $200 upon half-completion; and $310 upon completion, installation, and final approval.

The Section formally invited Mr. Pickett to compete for the commission in March 1937. (According to a postal display:)

Over the next six months, Pickett submitted pencil sketches of his mural theme and exchanged letters with the Section committee as suggestions and changes “for improvement” were made.

The initial design Pickett submitted included the first ships to arrive in Virginia — the Susan Constant, Godspeed, and Discovery — as well as Neptune in the mural’s foreground. The Section did not find this to be a satisfactory design.

In the design that was ultimately selected, suggestions included authenticating the type of boat, changing its scale in the mural, improving the drawing of what were considered important female figures, and clothing the female Indian. The artist also submitted a color sketch in the scale of two inches to the foot for approval.

Pickett’s description of the design separated it into three aspects:
The center portion showed the arrival of the first women at Jamestown — tobacco brides — whose arrival assured the permanency of the settlement. They are shown with “evidences of the beginning of the American home.”
The left portion showed a cavalier, the growing tobacco, slaves rolling a tobacco hogshead, and an Indian squaw watching the arrival of the first white women.
In the right background, Pickett included the weighing of the tobacco which paid for the passage of the women.

Installation, initially intended for May 1938, was delayed due to water intrusion. (The post office building faced the ocean.) The work was installed in January 1939, following efforts to waterproof the building. It was located above the Postmaster’s office door.

Unfortunately, the original building at 2400 Atlantic Avenue was razed in 2009 after being purchased by Walgreens. The re-development of the property took place despite opposition by local officials, businesses and other citizens. A news story from that year reported:

In July, the Atlantic Station had the mural removed before the local post office closed. The painting has since been restored and will likely be sent to another Virginia Beach post office.”

The 12-foot-by-4-foot mural was removed prior to demolition, and was restored over eight months by Parma Conservation in Chicago. The mural was “placed on a honeycomb support which was then secured through the slat wall [at its current home] into the base wall, and hung with earthquake-proof French cleats.”

The mural has been on display in the retail area of the Princess Anne post office, at 2509 George Mason Drive, since June 2009. It is accompanied by a display of historical information and documents. 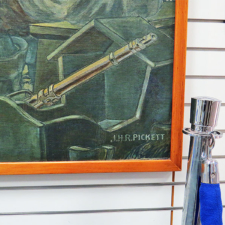 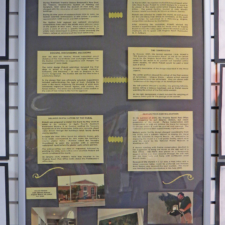 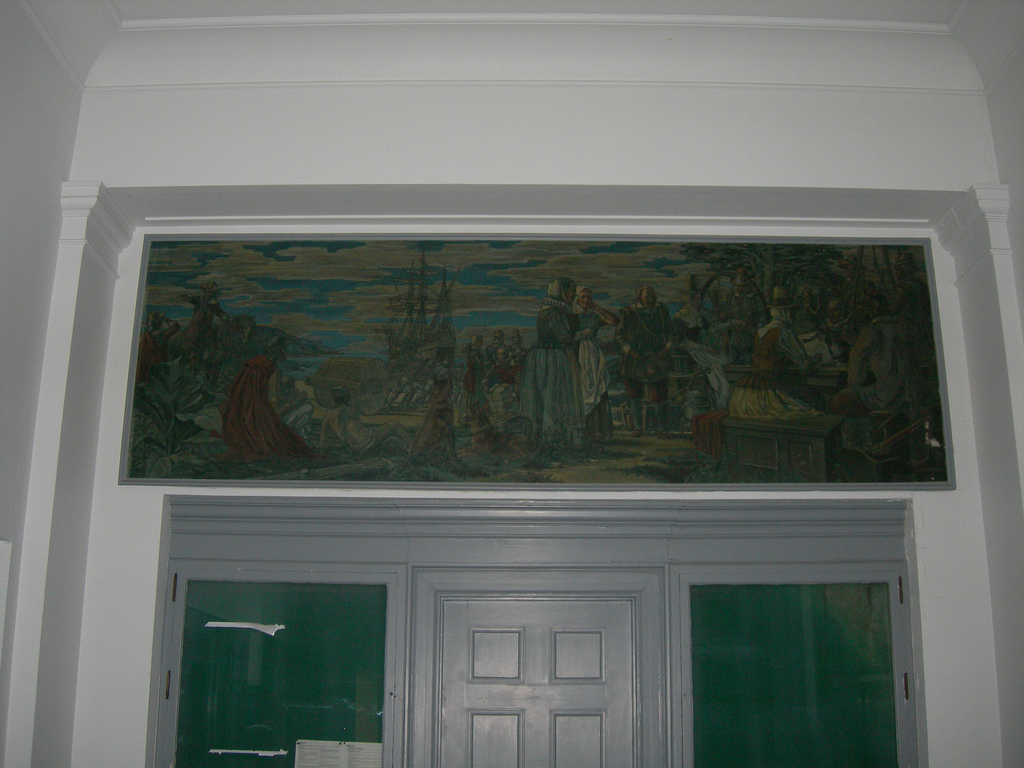 Mural shown in its original setting, at the since-demolished Atlantic Station post office