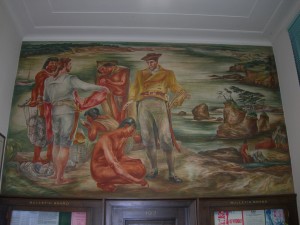 Titled “Captain Gray Entering Tillamook Bay,” this mural depicts Captain Gray, who is best known for discovery of the Columbia River in the year 1792. Four years prior to that, however, he became the first white man, on record, to set foot on Oregon’s shore. On the same voyage, he was the first to carry the American flag around the world. Residents of Tillamook County find special interest in the log of his visit. The log tells of the four days spent in what is now Tillamook Bay. He believed he had discovered the “Great River of the West,” something all nations were seeking.