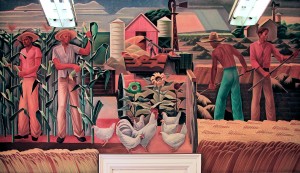 Painted by Texas artist Julius Woeltz, the Section of Fine Arts mural “Texas Farm” was produced in 1940. Woeltz was born in San Antonio, studied in Chicago as well as in France and Mexico, and was the head of the Department of Art at the Sul Ross State Teachers College in Alpine, Texas after serving in the US military during the Second World War. New Deal funding was behind the production of a number of other public art works by Woeltz, including the murals in the Amarillo Federal Building and Post Office and the Benton, AS Post Office.