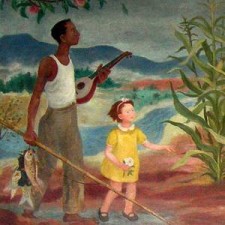 Doris Lee completed this oil-on-canvas mural, entitled “Georgia Countryside,” in 1939 with funds provided by the Treasury Section of Fine Arts. It is viewable in the Summerville post office lobby.

“Shortly after winning the Logan Prize for her painting Thanksgiving at the Art Institute of Chicago in 1935, Doris Lee (1905-1983) received her first major commission to execute two murals on rural mail delivery for the Washington DC Post Office. This post office was the grandest mural project of the Treasury Department’s Section of Fine Arts which held national competitions to commission artists based on skill, not need, to complete art work for federal buildings. Other artists who received commissions for the Washington DC Post Office included: Thomas Hart Benton, Grant Wood, Rockwell Kent, Reginald Marsh and Paul Manship.

“Upon completion of the DC murals in 1937, Lee received the Summerville, Georgia Post Office mural commission from the Treasury Department. Lee already had a good number of sketches of Georgia on hand from her many road trips through the South on the way to Florida for the winter. She used her sketchbooks to build a unified composition that included the three major crops of Georgia: peaches, corn and cotton. In the finished mural titled Georgia Countryside, Lee worked in additional symbols evoking the mural’s location. These included the Cherokee Rose, the state flower of Georgia, held by a little girl under a peach tree, and Georgia’s red soil shown nourishing each of the crops. While Lee did not make a sketching trip to Summerville, she did enjoy visits to her New York City studio by the town’s mayor and several of Summerville’s local officials over the course of the mural’s creation. The mural was installed in the post office in 1939 and remains on view today.” (dwigmore.com)