The lobby of the old post office (now privately owned) contains a New Deal mural entitled “A Skirmish between Bristish and Colonists,” which was painted in 1937 by Ross E. Moffett. The mural was funded by the Treasury Section of Fine Arts.

(Here is another photo of the mural that appeared in the Boston Globe, November 29, 2014) 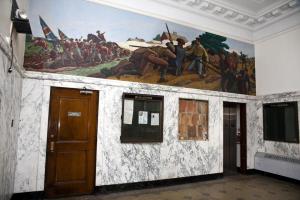