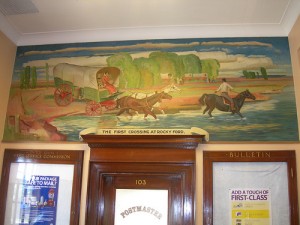 The mural “The First Crossing at Rocky Ford” hangs in the lobby of the historic Rocky Ford post office.

“With the Great Depression, fewer people could afford to patronize the arts, severely impacting the careers of artists. The Treasury Departments Section of Fine Arts provided employment by sponsoring artwork in federal buildings. Many of the post offices constructed during the Depression were decorated with murals or other artworks commissioned by the Section of Fine Arts. Funds for artwork were based on 1% of the total appropriation for the buildings construction. Victor Higgins was hired to paint a mural above the postmasters office at the south end of the lobby. It memorializes the early river crossings at Rocky Ford. The painting is on canvas, finished in 1936 shortly after the completion of the Post Office. The title of the piece is ‘The First Crossing at Rocky Ford’ and depicts a Conestoga wagon with a woman driver starting into a river while a man on horseback leads.

Higgins was born in Indiana to an Irish farm family. His first paintings decorated the interior of his familys barn. In 1899, at age 15, Higgins left for Chicago to study art. He worked a variety of jobs to pay for tuition at the Chicago Art Institute. In 1914, Higgins moved to Taos, New Mexico, becoming part of the Taos Art Colony. He achieved great success over the next two decades, exhibiting his work widely (including the Luxemborg in France and the Venice Biennale) and being elected to the National Academy.”