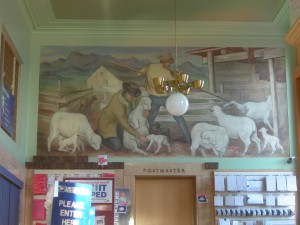 On February 10, 1942, the Treasury Section invited George Vander Sluis of Colorado Springs to submit designs for a mural that would go in the Riverton post office. The 13×6 foot painting, completed some eight months later was the last Treasury Section job done in Wyoming. Vander Sluis was picked for the $850 Riverton assignment on the basis of an entry he had submitted for a Denver mural competition. By this time, the country was involved in the war, a fact that intruded on the Riverton commission in two ways. The artist was pressed to complete his work before military induction and the Section itself was unsure of its mission, in the new war-time setting. Rowan advised the artist to contact the postmaster and citizenry at Riverton regarding suitable subject matter and “to learn of their attitude toward proceeding with a mural decoration in their federal building at this time. Sentiment favored the work and the postmaster suggested as an appropriate theme for the painting the farm and livestock industry of the locale. In May the Section approved the color sketches with only minor suggestions and in September the mural was completed. Rowan liked the artist’s work; ‘There is a nice stamp of authority in the presentation of the sheep in this painting which can come only from serious observation. From Riverton, Postmaster J. E. Smith wrote that “the work seems to have been very satisfactorily done and is being admired by the patrons to a quite considerable extent.” The war provided a post script to the commission. In November the artist, now in uniform and writing from his post in Maryland, told Rowan he would accept an invitation to visit at Rowan’s home, but passes were restricted. “When I do get the chance I will call you. Am becoming a soldier and I hope to be a good one.”