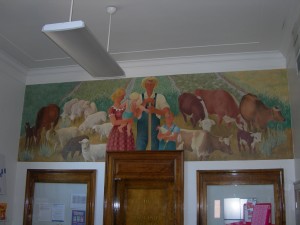 The mural in the Powell post office was completed in December, 1938, the work of a professional artist who had done similar work for post offices in Montana and North Carolina, and who had shown her work in various art exhibitions. Verona Burkhard received the Powell commission on the basis of designs she had submitted in the Dallas, Texas, post office competition. Trained in the east and from a family of artists, Ms. Burkhard lived at the Klondike Ranch near Buffalo when she received the $880 Powell commission. Visiting Powell in July, 1938, the artist determined that the theme for her painting would be local agricultural and livestock production as these were linked to the Shoshone Irrigation Project. Preliminary drawings and sketches met the approval of the Section in Washington but in the course of the work its officials made minor suggestions to the artist concerning composition and balance. Again, Rowan, representing the Washington office, was careful to suggest rather than direct; do not incorporate our suggestion he wrote in one letter “unless you yourself are convinced that it adds interest to the composition.” As the artist finished her work, she described reactions to it.

“The mural looks much better than the color sketch, and all the stock- men that have seen it think the animals are just right. I realize that most of the people here know little or nothing about painting, however. I have tried my best to put quality and good painting in this work — as well as make it understandable to the layman.”

On receiving a photograph of the finished work. Rowan complimented the artist on her handsome painting, a sentiment that was echoed in a letter from the assistant postmaster in Powell. The artist concluded her work with a note of appreciation for the job and the hope that she might secure another similar assignment.