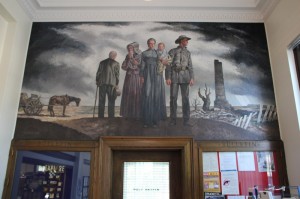 Although unpleasant subjects and memories are seldom seen in Post Office murals, the scene depicted is that of four people returning to their devastated land on a gray day in April, 1865 at the conclusion of the Civil War after having been forced off of their land as a result of Order Number Eleven which was a Union Army directive by General Thomas Ewing, issued on August 25, 1863, 4 days after a massacre by Quantrill’s raiders in Lawrence, KS.  The order affected all rural residents in Jackson, Cass, Bates, and Vernon counties in Missouri.

Tom Lea was born and raised in El Paso, TX.  He studied at the Art Institute of Chicago where he studied under muralist John Warner Norton.  During WW2, he was an eyewitness artist correspondent for Life Magazine and after was an illustrator of books, author of 14 books, and painted around the world.  He is best known for his paintings of Texas.

Location of other murals by Tom Lea: