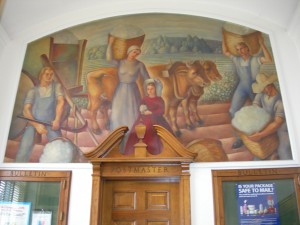 A Section of Fine Arts mural entitled “Early Settlers Weighing Cotton” was painted in 1938 by William S. McCall. The work is installed in the historic post office in Montevallo, Alabama.

“McCall, at the time from Jacksonville, Florida, received the invitation to do the Montevallo mural in 1938 on the basis of designs he had submitted for a competition in Miami. He immediately visited Montevallo and chose the theme of cotton and settlement of the region because,in his words, “Montevallo was a very important little town to the cotton industry of the State in the early days.” The postmaster, in the letter written to verify the installation of the mural, commented: “I would like to state that the citizens find the work a beautiful addition to our building and wish to thank the Federal government for this contribution. The heads of the Departments in our Alabama State College, as well as those students who are able to comment upon Mr. McCall’s workmanship, join me in saying that it is one of the best pieces of work seen in the State.” McCall wrote a final letter to the Section in which he commented upon his royal treatment in Montevallo.”