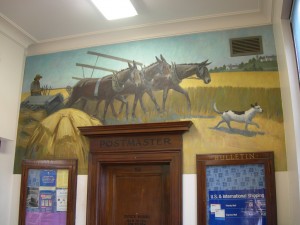 The Section of Fine Arts oil-on-canvas mural entitled “Harvesting” depicts a farmer using a three-mule team to pull a threshing machine across a wheat field. Painted for the Monroeville post office by Arthur Leroy Bairnsfather in 1939, it was restored in 1985 by John Bertalan, a native of Birmingham. Bainsfather won an open competition conducted by the Treasury Section of Painting and Sculpture under contract to WPA.  He was paid $680.

“A.L. Bairnsfather, of Birmingham, submitted three initial sketches to the Section after his invitation to do the Monroeville mural. The Section chose a harvesting scene even though Bairnsfather suggested to them that there was actually very little grain grown in the area. The mural was installed in January of 1939 and the postmaster and public were so pleased that they requested another panel for the opposite wall of the lobby.”