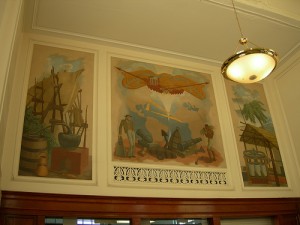 The oil-on-canvas mural, “Golden Triangle of Trade,” which hangs in the lobby of the historic branch post office in Medford, Massachusetts, was painted by Henry Billings in 1939. Often mistaken as a work created by the Works Progress Administration’s Federal Art Project, the three-panel mural was actually commissioned by the Treasury Section of Fine Arts, a separate agency that commissioned ‘decorations’ for federal facilities.

The mural is one of more than 1,000 pieces of art created for post offices and other federal buildings during the New Deal era. Concerns have perennially emerged in Medford about the content of the work, one of whose panels depicts the connection of the city to the slave trade—or, rather, “a representation of the artist’s assumptions about Medford’s historical past.” Some in the community have sought to have mural removed from its historic perch.

The mural has endured controversy for decades. According to the Medford Historical Society newsletter, fall 2011: “It was dedicated in 1939 and by the 1960s was covered up by wood panels. In 1993, it was restored and cleaned, and in 1999, an unsuccessful campaign was ignited to get the mural taken down due to its subject matter.” Following continued complaints regarding the content of the mural, it was covered with plastic in August 2020 as USPS reassesses its fate.