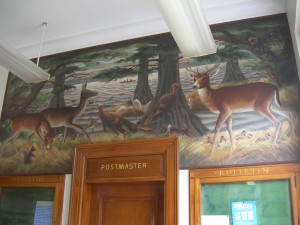 On August 21, 1939, Edward B. Rowan, assistant chief for the U.S. Treasury Department’s Section on Fine Arts, wrote Artist Avery Johnson of Denville, N.J., and invited him to “submit designs for a mural decoration for the Lake Village, Arkansas, Post Office on the basis of competent work [previously] performed under the Section.” Johnson, who was working on designs for the 48 States mural competition, wrote Rowan on September 27 to accept the invitation.

Johnson was among the winners of that competition, which apparently delayed the Lake Village project. He did not submit information needed to prepare the contract for the mural until December of 1940. The final contract called on Johnson to create a mural 12′ wide by 5′ 3″ tall, covering a total area of about 63 square feet. Johnson was to receive $750 for the work, which was to be executed in oil on canvas.

Johnson submitted two color sketches as proposals for the Lake Village mural. Rowan informed him on January 17, 1941, that “the one with the cypress trees in the center is preferred. This has the standing deer on the right.” Johnson’s first payment of $150 was approved on February 3, 1941.

While the Lake Village mural was not visited with the local controversy met by some Arkansas mural proposals, the location of a clock in the area where the mural was to be located elicited a flurry of no less than seven letters and memos between Washington, D.C., Lake Village, and Denville, N.J. Lake Village Postmaster John F. Mulligan informed Rowan on December 20, 1940, that the clock “can be moved easily to the center of the Public Lobby directly in the rear of the Vestibule and over the Parcel Post and Stamp Window. This will place same in the most central location possible in the Lobby.” Rowan requested permission of the Supervising Architect on January 4, 1941, for the clock to be moved; bids were accepted and Mr. M.L. Rhodes of Lake Village was hired on February 24, 1941, to relocate the clock, a task for which he was paid $35.

In March 1941, Johnson submitted a full-size cartoon of the mural to the Section. “I am also forwarding a print to the local committee down there and will await the approval both of your office and this committee before proceeding with the finished painting,” he wrote in a March 3 letter to Edward Bruce, Fine Arts Section chief. Both apparently were approved, and Johnson was issued a $250 dollar payment on April 1, 1941.

The finished mural was approved for installation on July 23, 1941, and Johnson sent it for installation by a Mr. Purser, who had installed another of the artist’s murals in the Leland, Miss., post office previously. The mural was hung on Sunday, August, 10, 1941. An August 15, 1941, article in The Chicot Spectator includes a lengthy interview with the artist, noting that Johnson “was especially interested” in the area’s heavy deer population around Lake Chicot “and the deer were consequently made the most prominent element in the design.”

Postmaster Mulligan reported the mural safely installed as of September 29, 1941, and Johnson’s final $350 payment was approved on October 29.”