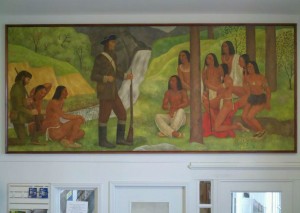 “The mural in the photo above, titled “George Rogers Clark Confers with the Indians Near Herrin, Illinois” was painted by Gustaf Dalstrom and installed in the Herrin post office originally on May 27, 1940.  It was rededicated May 26, 2011, after a 47-year absence. In 1964 the lobby was renovated, and the mural was noted as being destroyed during the project.  The assistant postmaster at the time, Paul Popham (now deceased), salvaged the mural from the dumpster, however.  As there seemed to be little community interest in the mural, Paul’s son, Tom Popham, took the mural with him when he moved from Herrin.  The mural eventually found it way to Stillwater, Oklahoma, in 1983.  In 2005 the Southern Illinoisan published an article titled: “Missing Post Office Mural Provides Local Mystery.”  Tom Popham found the article online and immediately issued a press release indicating the mystery had been solved. He still had the mural in storage after all of these years. On October 14, 2008, Tom and his wife drove the mural from Oklahoma to Parma Conservation in Chicago.  The mural was faced with Japanese tissue and Beva 371 consolidating adhesive to maintain the fragile condition of the oil painting image as we planned its future.  The goal was to return the mural to Herrin in the best possible state of conservation.

Over the years, the Postal Service has been actively seeking grants to assist in the restoration and return of this mural to the community.  In June 2010, at my request, Dr. Mary Emma Thompson, author and friend, made a trip to Herrin to visit with the mayor, Vic Ritter, the Ladies Group and other interested groups.  The Ladies Group accepted the challenge of this project and were successful in collecting donations that made the rededication possible.  The restoration award was given to Parma Conservation in November 2010.  The mural was delivered by Parma Conservation a few hours before the May 26 dedication, closing the case of the missing mural.”    (www.newdeallegacy.org)