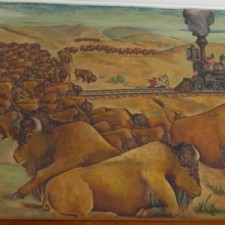 The oil-on-canvas mural “Stampeding Buffaloes Stopping the Train” was painted by Eldora Lorenzini in 1939.

“Eldora Lorenzini studied at the Colorado Springs Fine Art Center. She matched the color of the buffalo hides to the wood framing the doorway to the postmaster’s office, making the mural a part of the endwall of the lobby. She did other murals in Colorado and Washington, D.C. and worked as a decorator, printmaker, and illustrator. In Nebraska, a commission for painting a mural in a post office ranged from $570.00 to $1,300. Eldora received $670.00 for this mural. She lived at the YWCA until she received her money for her work.

Eldora Lorenzini did lots of local research before painting this mural. In fact, she went to the zoo to study buffalo, but she reported that her visit was not very successful because the “buffalo were molting”.

Section Chief Rowan and his assistants critiqued preliminary sketches and made suggestions about composition and specific details. Eldora Lorenzini had received approval for a theme of buffalo stampeding a train. Rowan criticized the “anatomical lessons” of the bison in her sketch and the depiction of a skinned buffalo. He felt that such elements “did not represent good taste for the decoration of a post office.”

Local communities had no control over whether they received a mural or its content. The public did, however, comment on the completed art after it was installed! Nebraska’s 12 murals were generally received with great enthusiasm by local citizens with the exception of the Valentine mural. In fact, the residents of Hebron assisted in installation of this mural, and became big fans of Eldora.”
(http://communitydisc.westside66.org) 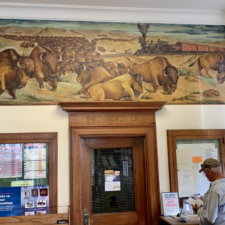