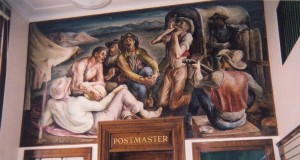 The fresco “Chuck Wagon Serenade” was painted by Manuel A. Bromberg in 1940. It was a winner of the Treasury Section’s 48-State Post Office Mural Competition.

In June, 1939, the Treasury Section conducted a national competition from which 48 paintings were selected, one for a post office commission in each of the states. The December 4th issue of Life magazine carried a brief story on the contest and reproduced the 48 winning designs. Manuel Bromberg’s painting, “Chuck Wagon Serenade,” was picked for Wyoming’s new post office in Greybull; Bromberg, a 22-year-old artist studying at the Colorado Springs Fine Arts Center, had exhibited his painting widely and had done murals for the Section in both Oklahoma and Illinois. The Greybull commission was for $840 and with the Life article, Greybull residents had a preview of their new mural. From civic clubs in Greybull came notes of protest, the tone of which is indicated by this excerpt:

“Many exceptions have been taken to the proposed mural. Including such things, as the peculiar looking individuals supposed to be cowboys, the background of rather uncertain description and the lack of any feeling to the picture.”

Unlike the other Section commissions done in Wyoming, the Bromberg painting had no direct link with the immediate locale; a prairie scene of cowboys singing to the accompaniment of harmonica and guitar, the mural was the product of the artist’s own imagination. The theme is universal rather than local, the figures stylized, not overtly realistic. Writing from Washington, Rowan came to the defense of the painting. To one of the critics he pointed out that it had been chosen in a competition “open to every American artist,” that its design was truly distinguished and that its details could, of course, be tailored to the Wyoming locale. Made aware of the tensions, Bromberg assured Rowan that he would strive to win over the local people and that he would be “extremely cautious with the authenticity of the costumes and the region.

Thanks to his prize-winning design, Bromberg worked with few suggestions from Washington. The mural was first exhibited at the Colorado Springs Fine Arts Center and when he had seen pictures of it. Rowan commended the artist; “The work seems to us authentic in feeling, beautiful in painting quality, vital in design and distinctive in mood.” The mural was installed on September 4, 1940; the postmaster thought it a “real work of art”, and that it would be appreciated by most of the people in the area. Bromberg too was pleased with the outcome:

“The entire staff of the post office have been more than kind and happy about the mural; they assisted me no end with the installation. The postmaster is delighted and the natives of the Town, as much as I could gather from their comments seemed more than satisfied. Which makes for a happy ending.”

Not so happy a note was the young artist’s economic plight. Correspondence with the Section in the course of the commission suggests that his financial status was most precarious. The first segment of his commission pay he used to cover old debts; the Greybull assignment itself had kept him from qualifying for local relief payments, yet on a day-to-day basis he was without “financial sustenance.” In a final letter to Rowan, the artist sketched a situation which plagued many artists during the depression:

At this point I am tempted to burden you with personal troubles (financial) …. I realize that you must receive many such letters. So when I say I am in great need of the final payment and another commission I know you won’t take it too lightly. Believe me it irks me to annoy you about such matters.