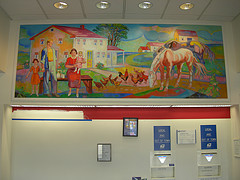 Created for the former New Deal post office in Geneva, Ohio, Living New Deal believes the New Deal mural “Rural Homestead” to reside in the ‘new’ building that replaced it.

“William Sommer’s mural, Rural Homestead, was chosen as the winner of the competition for the Geneva, Ohio post office. It was a simple design of a family posing in front of their farmhouse, representing American values and a typical Middle American lifestyle. In executing the design, however, Sommer was not as interested in the social realist movement as were many other artists. He was considered the premier representative in Cleveland of modernist tendencies, although he accommodated his style somewhat for this mural. In an article that he wrote on his working methods for a WPA publication. Sommer described the influence of Cezanne’s cylinders, cubes, and cones and noted that he did not feel constrained by natural forms and colors. Sommer improvised depending on what he thought was best for the overall design of the work. As such, his work was sometimes at odds with a literally minded public.

This level of disagreement was common. As popular culture scholar Karal Ann Marling has argued, a small-town perspective sometimes made any artistic license suspect. There were many examples of murals being altered so that either the style would not appear to be condescending to the public, or that the familiar appearance of local sights would not be distorted. Program administrators made every effort to anticipate and remove any cause for potential objection. Particularly in small towns, the result could be bland works of art. When work first began on the Geneva post office mural in 1937, suggestions for modifications were already being sent to Sommer. In a letter dated December 24, 1937, [Assistant Chief of the Section of Fine Arts in Washington DC], Edward Rowan wrote:

‘Permit me to acknowledge the receipt in this office of your two inch scale color sketch of your proposed mural decoration for the Geneva, Ohio Post Office … This had been considered by the members of the Section and the Supervising Architect and while we feel that there are elements in the design, which may be used in the decoration, there are others which we feel would have little meaning for the general public. We are asking you to give further study to the sketch.’

Sommer dutifully responded and somewhat altered the sketch. In the committee’s eyes, however, it was not enough. They asked for other alterations and Sommer did his best until the final sketch was approved in March 1938. When Sommer received his first payment voucher, he began work in earnest on the mural. By early October the mural was finished and a photograph of the completed work was sent to Rowan for approval to install. Rowan suggested more minor changes to the mural, asking Sommer to make the horses legs more realistic and to enhance the shrubbery in front of the farmhouse so that the family would look like they had lived there for a number of years. Again, Sommer tried to comply. However, when an article appeared in the November 3, 1938 issue of the Geneva Free Press complaining about the way the mural was painted, Sommer could no longer restrain himself. In a long letter to Rowan, he explained in painstaking detail all of his corrections to the mural and reasons for painting it as he did. He argued:

‘The bright colours [sic] on the mural are not splashed here and there, but are carefully adjusted to each other, and the modulation of colour used endlessly throughout the canvas, all done with a small sable brush, no brush marks showing … Why can’t a farmer’s wife wear a nice cool white shoe in mid-summer? These two white shoes in the mural were used as part of the design. The eye catches these two white spots on the ground and then is led up to the milk pitchers and glasses…’

Elsewhere in the newspaper article, local citizens complained about perspective and the use of shadow. Sommer replied:

‘The perspective is correct. Our point was on the horizon and we used a piece of chalked string to snap the lines thru the house. What other way could it have been done? Lights and shadows—there are no shadows in the mural, not a single one. They would have cut the mural to shreds… shading yes, but not shadows…when the remarks from Geneva Free Press are sifted down very little remains that can be taken serious.’

Rowan let the matter go and paid Sommer the remaining money he was owed.”