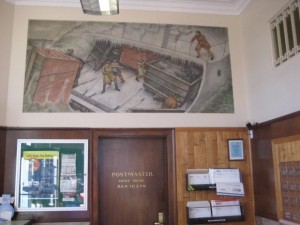 , Source © Interlochen Center for the Arts 2012

The historic post office in Frankfort, Michigan contains an example of New Deal artwork: a Treasury Section of Fine Arts mural entitled “On Board the Ferry Car (Ann Arbor #4, Feb. 14, 1923).”

“The first thing you notice when walking into Frankfort’s post office is the stately 1940s architecture. There are dark wood walls, marble floors and high ceilings. But there’s also a mural that you just might miss if you don’t happen to look above the postmaster’s office door.

The mural is about the size of a family dining table and it depicts an Ann Arbor car ferry as its crew battles a fierce winter storm on Lake Michigan. The painting shows the stern of the car ferry as crew members struggle in high winds to secure the cargo…

The mural came out of the Depression. The artist was Henry Bernstein. Bernstein had graduated from the Detroit Society of Arts just when the Depression was at its worst. Sandman says the WPA paid for hundreds of post offices to be built around the country.

Sandman says, “One percent of all the monies that were allotted for post office buildings had to go to the arts.”

The WPA paid artists 28-dollars a week in exchange for one painting a month. Bernstein painted the Frankfort mural in 1941.”   (ipr.interlochen.org)