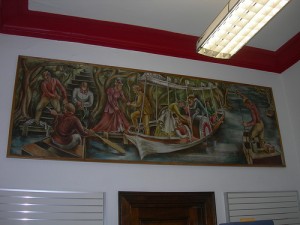 The mural “White Fawn” by artist Miriam McKinnie (Hofmeier) was commissioned by the Treasury Department’s Section of Fine Arts in 1939 to be placed at the Forest Park Post Office.

The history of the mural began in 1880, when the original White Fawn was built. The original White Fawn, a side-wheeler steamboat, was built by the sons of Ferdinand Haase, Leo G. Haase and William F. Haase, to be used as an excursion boat at the Haase home on the Des Plaines River. Ferdinand Haase, a pioneer settler who came to the area in 1851, founded Haase Park in 1880. A public park, predating Lincoln Park, Hasse Park was a rare attraction at the time, drawing sightseers from nearby Chicago to view the countryside. The Haase, Zimmerman and Schultz families of Forest Park living at the house offered accommodations to visitors along with boat rides. They were recorded as bringing as many as 30,000 people to the area on one Sunday. In addition to its depiction of the White Fawn, the mural features a suspension bridge in its background. Also built and designed by Leo and William Haase, the bridge was considered an engineering feat at the time. Hasse’s home, and the original docking site of the White Fawn is located on what is now Waldheim Cemetery in Forest Park, IL. (“Swimming Hole Lure For Young”; “Post Office Cleaning Reveals 1800’s Mural”; “New Mural At Postoffice”).

Upon receiving her assignment from the United States Treasury department to paint a mural for the Forest Park Post Office in September of 1939, Miriam McKinnie only knew that the mural must have some significance to Forest Park. In his meeting with the artist, postmaster Author H. Schuler brought four old photographs given to him by a descendant of Ferdinand Haase, Wilbert W. Haase. The photographs depicted the Haase house during the late 1800’s, life along the Des Plaines River, and the White Fawn. Upon request, McKinnie was taken to the original site of the Haase home and supplied with further details from Wilbert Haase. McKinnie then returned to her home in Edwardsville, IL to begin sketches of the mural. Once completed, the artist’s sketches were sent to Washington D.C, to receive approval from the Treasury Department. After approval, McKinnie began painting. The mural was completed in 1940. A bronze plaque to be hung with the mural, was donated by Wilbert W. Haase in 1940, but was never put up (“New Mural At Postoffice” 1).

The artist, Miriam McKinnie (Hofmeier), was born in Evanston, IL on May 25th 1906. She came from a family of artists, her mother was a “Sunday painter” and her grandfather was William Wells, a noted wildlife painter and head of the art department at the Chicago Tribune. McKinnie studied art at the Minneapolis School of Fine Art, the Kansas City Art Institute, and the Colorado Springs Fine Arts Center. She also earned her Master of Fine Arts at the Instituto Allende in San Miguel de Allende, Mexico in the 1930’s. Her work was heavily influenced by the painter Anthony Angarola, whom she studied under for three years at his school in Chicago. One of McKinnie’s greatest skills was working in a variety of mediums, including: oils, caseins, lithographs, brush drawings, pen-and-ink sketches, and collage. After McKinnie married her husband, Donnell Hofmeier, she took on the role of a housewife and practiced as an artist second. Despite this, McKinnie pursued her career in art, becoming a teacher at Washington University School of Fine Art and an exhibitor and visiting instructor at Ste. Genevieve’s artist colony in Missouri. McKinnie’s style was unique and recognizable as Marquis Childs of American Magazine of Art said, there’s “a boldness to her work which is expressed in the richness of her color, dark in key, mysterious and compelling in its total effect”. She was known to use bright colors with bold dark outlines, with an overall golden glow achieved by glazing or applying multiple layers of browns and deep reds.

McKinnie’s mural, originally hung in 1940 upon its completion, was removed in the early 70’s and stored in the post office basement to allow the walls of the post office to be repainted. A Forest Park librarian, Cleis Jensen noticed the mural was missing in 1975 and brought it to the community’s attention. The mural was then moved from the post office basement, to a vault in the library where it stayed until 1993. The mural was again discovered in the library’s basement rolled up and suffering from considerable damage. The mural had water damage, ripples from being rolled up, and dirt and grime from years of smoking in the post office. The community, alongside the local historical society, began efforts to restore McKinnie’s work. The effort to raise money to restore the mural finally ended in 2004, when the money was raised and Parma Conservation of Illinois took on the project. The mural was originally adhered to the wall with lead adhesives and required gas masks to remove the toxic adhesive as well as the addition of a new back. The conservationists also restored missing paint and the missing upper left hand corner of the piece. On February 25, 2005 the mural was rededicated to the Forest Park Post Office where it now hangs (“Post office cleaning reveals 1800’s mural”; Lou).

In more recent years, the Forest Park post office has been at risk of closing down, putting the fate of the “White Fawn” in question once again. The mural is not only a living example of Roosevelt’s New Deal initiatives, but also encapsulates the history of the Forest Park community. Created specifically for the people of Forest Park, it is vital that this historical document and unique work of art does not get forgotten.

Project originally submitted by Jessica Schmidt, Columbia College on May 20, 2014.