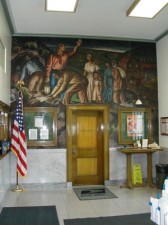 “James Newell had produced several public murals by 1940 when the U.S. Treasury Department’s Section of Fine Arts commissioned him to create a mural for the post office in Dolgeville, New York. He researched the history of Dolgeville before designing a mural for the post office. As he read about the Mohawk Valley, he wrote that he had found “some of the most interesting and exciting material I have ever looked into.” He decided to paint a scene of an abolitionist farmer helping escaped slaves as day breaks at Brockett Farm, one of the two Underground Railroad stops near Dolgeville. Newell chose a muted palette of browns, blues, and greens to convey the secrecy and danger involved in this activity. He structured his composition so that the expansive hills stretch into the background, symbolizing the long journey the runaway slaves had made through the night. Newell highlighted the heroism of the slaves and the people who helped them by showing a man leaning into lantern light to read a flyer offering a reward for his capture. He created the final piece, which can be seen today in the Dolgeville post office, using a technique known as fresco by painting on a thin, wet layer of plaster.”