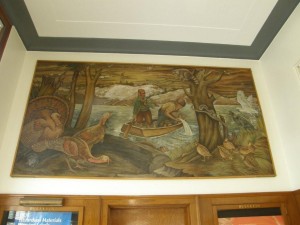 Used with permission of the United States Postal Service

“Henry Simon was commissioned $750 to create a mural for De Queen, Arkansas on the basis of competent designs submitted in the San Francisco, California, Post Office, Ricon Annex, Mural Competition. His initial sketch comprised a logging scene, however, this composition was discarded when the town expressed concern that Simon was focusing one only one of the areas many industries. Instead, of attempting to incorporate all of the communities facets of production, Simon chose to compose a scene depicting the local wildlife of the area.

The mural illustrates a scene of wildlife conservation in Arkansas. It depicts a typical woodland landscape with wildlife native to the area of DeQueen. In the foreground of the mural are quail, wild turkey, squirrel, a raccoon, blue heron, and deer. In the center are two men restocking a local stream with fish. In the back, left of center, stands a solitary stag. The lumbering industry is addressed via the logs dotting the far banks of the river and the fire lookout in the extreme background.” 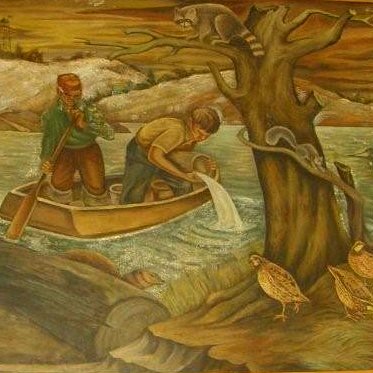 Used with permission of the United States Postal Service