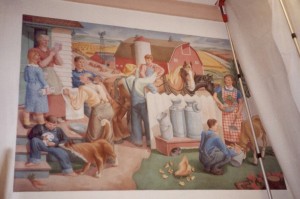 “Richard Haines was born here in 1906. His parents, Fred and Hattie, were pioneer farmers at the turn of the century and Richard began sketching scenes of cows and the countryside as a child. His natural born skills were sufficient to win him a scholarship at the Minneapolis School of Art, where, upon graduation, he was hired as a professor. Haines was not content with the limited artistic styles offered there, so he enrolled in the L’Ecole des Beaux Arts in France…

As a result of his exposure to the fine arts in France, he returned to the states at the time of the Depression and almost immediately started receiving commissions from the Federal Treasury. Amongst these is one of the most colorful of murals in Iowa, which he painted for the Cresco Post Office in 1937. In it, he harkened back to his days in Marion and produced a scene depicting the farm and two generations of family that had lived there. It shows a joyous site of horses, cows, pigs, and chickens, as family members perform chores and his mother reads a letter just delivered by the postal service…

Haines continued to paint throughout the Depression, completing eleven other Federal Treasury murals, including at post offices in Illinois, Kansas, Washington and Missouri.”    (http://www.mariontoday.org)