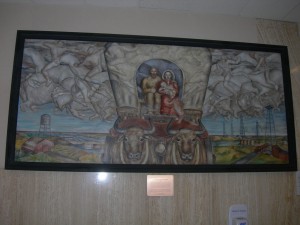 Medium: Oil on canvas, size: 10′ x 5′. “The Fertile Land Remembers”, by Louise Emerson Ronnebeck (1901-1980) depicts a determined looking pioneer farming family in a Conestoga wagon pulled by oxen heading toward the viewer. In the background/sky are Indians riding horses chasing buffalo, executed in a translucent cloud-like manner. The Indians and the pioneer farming family were both historically dependent on the land and they are shown being displaced by the new, thriving and growing oil industry.

In November, 1937, the Section invited Louise Ronnebeck of Denver, Colorado, to submit sketches for a mural in the Worland post office. The agency had hoped to find a Wyoming artist for the job, someone who had placed well in regional competitions; one had materialized and the Denver artist was picked on the basis of her sketches for an El Paso, Texas, competition. The Worland commission was for $570 and the artist was allowed 119 days for its completion. The Section wrote Ronnebeck that the mural called for a “simple and vital design” based on a theme appropriate to the locale. She submitted four sketches to the Washington office; of these one that depicted the Indian and pioneer past as displaced by an economy of oil, ranching and irrigation seemed most acceptable. Ronnebeck had not visited Worland but had corresponded with the postmaster there about an appropriate subject matter for the mural. She worked on her painting in the late spring of 1938 (the contract was dated 1 February 1938), completing it in June of that year. In the course of the commission she spent a good deal of effort explaining and defending her conceptions to the Washington office. The problem centered about the artist’s treatment of the mythic and historic elements of her painting — Indians, bison — which she wished to incorporate as a kind of dream background in the mural. At one point she called on a professional acquaintance, the director of the Denver Art Museum, for support and he wrote that her attack on the general problem was both original and promising. The continual suggestions from Washington were phrased with tact and with an obvious effort to leave final decisions with the artist but the correspondence suggests that the Section took even a small commission quite seriously. Nor did the artist take offense at the suggestions. Having submitted sketches to an architectural firm in Denver (the concern had been favorably impressed by her Worland design) she assured the Section that its commission came first. The Denver firm liked her work but its client was reluctant to add the expense of her decoration; “What would the artists do without the government?” she concluded.

Once the mural was installed, Rowan wrote from Washington that he was glad the artist had persisted in her ideas and that her painting had combined elements of fantasy and reality “quite successfully.” Ronnebeck noted that the mural seemed to please the people of Worland and that she had much enjoyed carrying out the commission; its execution seemed to have added to her reputation as an artist, she added in a final letter. From Worland, the postmaster endorsed her work, pleased with the favorable comment on it and certain that it was a “real addition” to the building.