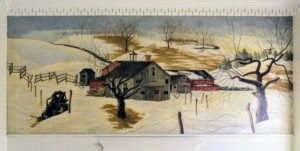 The 1937 mural “Beatty’s Barns,” created for the then-new Canonsburg post office, was painted by Peter Blume for the Treasury Section of Fine Arts.

In 1937, the Pittsburgh Post-Gazette described the mural’s unveiling as “a detailed, realistic piece of down-at-the-heel farmscape which the layman can readily understand. In fact, the mural’s popularity is due, probably, to the familiarity of its objects–a ramshackle farmhouse, a broken fence, a disintegrating automobile, and so on.” Eleanor Roosevelt admired the original sketch so much that she hung it in the White House.